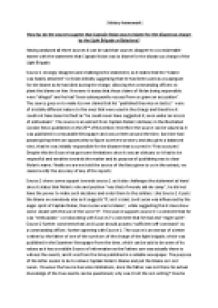 How far do the sources suggest that Captain Nolan was to blame for the disastrous charge by the Light Brigade at Balaclava?

﻿[history homework] How far do the sources suggest that Captain Nolan was to blame for the disastrous charge by the Light Brigade at Balaclava? Having analysed all three sources it can be said that sources disagree to a considerable extent with the statement that Captain Nolan was to blame for the disastrous charge of the Light Brigade. Source 1 strongly disagrees and challenges the statement, as it states that the ?blame was hastily attached? to Nolan initially suggesting that he had been used as a scapegoat for the blame as he had died during the charge, allowing the commanding officers to plant the blame on him. However it states that these claims of Nolan being responsible were ?alleged? and he had ?been subsequently rescued from so grave an accusation?. The source goes on to make its own claims that his ?published theories on tactics? were of a totally different nature to the ones that were used in the charge and therefore it could not have been his fault as ?he could never have suggested it, even under an access of enthusiasm?. ...read more.

the eager spirit of Captain Nolan, then Lucan was to blame?, while suggesting this it does show some doubt with the use of the word ?if?. This source supports source 1?s comment that he was ?enthusiastic? corroborating with Source 2?s comment that he had and ?eager spirit?. Source 2 further comments that Lord Lucan should possess ?sufficient self-command? as a commanding officer, further agreeing with Source 1. The source is an extract of a letter written by the father of one of the survivors of the charge of the light brigade, which was published in the Examiner Newspaper from the time, which can be said to be some of its values as it has a credible Source of information as the Fathers son was actually there to witness the events, and it was from the time published in a reliable newspaper. The purpose of the letter seems to be to relieve Captain Nolan?s blame and put the blame on Lord Lucan. However the Source has some limitations, since the father was not there his actual knowledge of the true events can be questioned, why was it not the son writing? ...read more.

The Source tells us about Nolan?s personality ?headstrong? shows he has his own set of opinions on cavalry, similar to Source 1. However there is some uncertainty limiting the usefulness of this source as Paget mentions that there ?might have been friendly views exchanged on the delivery of the order? and as he was the second in command he may be covering up someone?s mistakes. To conclude having evaluated all the sources it is clear that Source 1 and 2 strongly disagree with the statement and support the relieving of the blame from Nolan?s name however Source 3 agrees and suggests that he was ?ill-suited? which is slightly supported by Source 2. However it can be seen that from the sources, that Captain Nolan was to blame to a limited extent as source 1 states that it could not have been him due to his published theories on tactics and source 2 defends him in saying that it was not his role to make such decisions, that was up to the higher ranking. And although Source 3 does agree to the statement when it mentions that he was ill-suited, this corroborates with Source 2 in a sense implying that he wasn?t the person to be leading this charge. ...read more.

There is strong understanding of the sources throughout and the author stays focused, resisting the urge to include additional knowledge. A 'for' and 'against' structure would have allowed for more comparison and some points about provenance are evaluated better than others. 4 out of 5 stars.