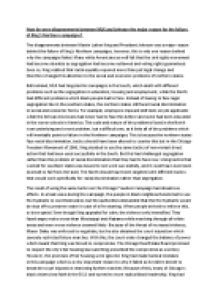 How far were disagreements between MLK and Johnson the major reason for the failure of Kings Northern campaigns?

﻿How far were disagreements between MLK and Johnson the major reason for the failure of King?s Northern campaigns? The disagreements between Martin Luther King and President Johnson was a major reason behind the failure of King?s Northern campaigns, however, this is only one reason behind why the campaigns failed. Many white Americans as well felt that the civil rights movement had become obsolete as segregation had become outlawed and voting rights guaranteed. Even so, King realized that racial equality required more than just legal change and therefore changed his attention to the social and economic problems of northern states. Beforehand, MLK had targeted his campaigns in the South, which dealt with different problems such as the segregation in education, housing and employment, while the North had different problems which black people had to face. Instead of having to face legal segregation like in the southern states, the northern states still faced racial discrimination in social and economic forms. For example, employers imposed skill tests on job applicants while the African Americans had never had to face this before and some had been educated in the worse schools in America. The scale and nature of the problems faced in the North is an underlying and a root problem, but a difficult one, as it links all of the problems which will inevitably point to failure in the Northern campaigns. ...read more.

Because of this, many of Chicago?s black citizens lost faith in the SCLC and turned to more radical black leadership. King had misjudged the situation very greatly, as in this campaign President Johnson also refused to involve the Federal Government in the campaign. This was because Johnson was no longer willing to work with King following his attack on the Vietnam War in which he led a march of 5000 anti-war protestors through Chicago. Also, the Vietnam War became the major priority for the Federal Government at this time, as they were more occupied that and saw it as more important than the civil rights movement which had already achieved a great deal already. The changed context also created an underlying problem and reason for the failure of the Northern campaigns. If the Northern campaigns hadn?t been during the time of the Vietnam War in which the Fed Gov was more occupied, then Johnson may have involved the Federal Government in the Chicago Freedom Movement. Without the federal government involved they can?t enforce much on the northern states, as the racial discrimination is because of the attitudes of ordinary whites too and they can?t force them to change what they believe in. ...read more.

The Vietnam War itself did hinder the progress of the civil rights movement?s involvement in the Northern campaigns as not only did it occupy the Federal Government, but it also split the movement in two on how to deal with the war. MLK and the SNCC were both against the war, which made them very unpopular with many people. On the other hand, the NAACP supported the war, which lost its support with other people. This created a divide between the civil right movement, rather than the unity that they had before which meant that it would decelerate the progress of the movement as the movement itself was having problems within it. Overall, the disagreements between MLK and Johnson was a major reason for the failure of King?s Northern campaigns, however, this was only one reason among many other which are linked together. Without the right tactics used by Black leadership (MLK), the attitudes of ordinary blacks towards King would falter, and with the changed context of the Vietnam War taking place at the time, the media and the federal government weren?t as occupied with the civil rights movement as before. All of these, along with the disagreements between MLK and Johnson and the two way split inside the movement meant that the Northern campaigns weren?t going to be as successful as the Southern ones turned out to be. ...read more.