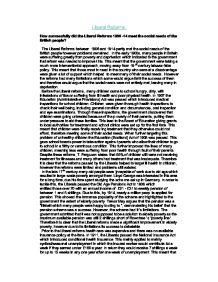 How successfully did the Liberal Reforms 1906-14 meet the social needs of the British people?

Liberal Reforms. How successfully did the Liberal Reforms 1906-14 meet the social needs of the British people? The Liberal Reforms between 1906 and 1914 partly met the social needs of the British people however problems remained. In the early 1900s, many people in Britain were suffering greatly from poverty and deprivation which indicated to the government that reform was needed to improve this. This meant that the government were taking a much more interventionist approach, moving away from 19th century laissez-faire policy. This meant that those most in need in the country who were at a disadvantage were given a lot of support which helped to meet many of their social needs. However the reforms had many limitations which some would argue limit the success of them and therefore would argue that the social needs were not entirely met, leaving many in deprivation. Before the Liberal reforms, many children came to school hungry, dirty, with infestations of lice or suffering from ill health and poor physical health. In 1907 the Education (Administrative Provisions) Act was passed which introduced medical inspections for school children. Children were given thorough health inspections to check their well being, including general condition and circumstances, oral inspection and eye examinations. Through these inspections, the government discovered that children were going untreated because of the poverty of their parents, putting them under pressure to aid these families. ...read more.

Also, the families of those insured workers were not covered by the Act meaning that if a family member was ill, the doctors bills still had to be paid out of their own pocket. Therefore it is clear that the Liberal government did attempt to improve the health care available to workers through the National Insurance Act, however as many people were not included, the success of the Act is debatable. Before the Liberal reforms the unemployed of Britain had no income to live on as benefits were unavailable. This meant that they could not support themselves or their families leading to severe poverty. Victorians felt it was a moral problem, however reports like Booth's and Rowntree's highlighted it was largely due to reasons beyond control. The Labour Exchanges Act, passed in 1909 helped unemployed people find work through the use of job centres. Due to the Act about 3000 people were being set up with work everyday by 1914, despite scepticism from both employers and employees. The Act however had its limitations as it was unknown whether the exchanges actually helped tackle to problem as employment was already high due to the potential war. It was not completely effective as 75% of those listed on the Labour Exchange did not find employment. ...read more.

By introducing a pension for the elderly in Britain, the extent of poverty was further revealed due to the number of applicants and with more money to live on, improvements were made to people's lives, however the amount of money given was below Rowntree's poverty line meaning it was inadequate to live on and not all people were entitled to the pension. The National Insurance Act, 1911 introduced health insurance for the worker in case of sickness, meaning that more people could now afford to get medical treatment, however not everyone was eligible suggesting the limitations of the insurance. In order to help the unemployed find work, for employers to find workers and to provide unemployment benefit, Acts were passed which meant that thousands of more jobs were found for people and the unemployed still had an income to help them financially, however many people still remained uninsured and unemployed. To improve conditions and pay for the employed, Acts were passed which set minimum wages and improved conditions in the workplace, however as the minimum wage was not defined and there was no mechanism to ensure increased wages were given, not a lot happens to improve the pay of these workers, leaving many still in poverty. These reforms were a significant step away from the laissez-faire principle and marked a significant improvement when meeting the social needs of the British people, however by 1914, many problems still remained and poverty was still a serious issue. ...read more.