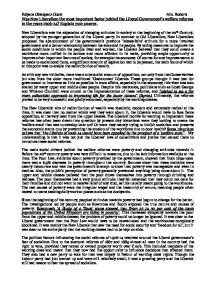 Was New Liberalism the most important factor behind the Liberal Government's welfare reforms in the years 1906-14? Explain your answer.

Was New Liberalism the most important factor behind the Liberal Government's welfare reforms in the years 1906-14? Explain your answer. New Liberalism was the expansion of changing attitudes in society at the beginning of the 20th Century, adopted by the younger generation of the Liberal party. In contrast to Old Liberalism, New Liberalism proposed the abandonment of the government's previous 'laissez-faire' attitude for a more involved government and a better relationship between the state and its people. By taking measures to improve the social conditions in which the people lived and worked, the Liberals believed that they could create a workforce more unified in its actions and more efficient in its tasks, providing ample opportunity to improve other important features of society, for example the economy. Of course for any improvements to be made to social conditions, a significant amount of legislation had to be passed, the main focus of which at this point was to enable the redistribution of wealth. As with any new initiative, there was a substantial amount of opposition, not only from the Conservatives but also from the older more traditional 'Gladstonian' Liberals. These groups thought it was best for government to intervene as little as possible in state affairs, especially in the economy; this view was also shared by many upper and middle class people. ...read more.

The poor themselves had a very proud attitude: they felt ashamed that they could not care for their families and did not want to receive relief of any kind, as this usually meant going to the workhouse. The real causes of poverty were the irregular wages and the insecurity of tenure, meaning people often moved to towns seeking daily work at places such as the dockyards. Since the beginning of the century, peoples' attitudes towards poverty had begun to change for the better. The investigations led by people such as Rowntree and Booth exposed the true nature and causes of poverty. Rowntree's 'A Study of a Town' alone showed that 'from 25 to 30 per cent of the town populations of the United Kingdom are living in poverty'. This increased sympathy towards the poor from the upper and middle classes; the problem of poverty could no longer be ignored. It was clear to the Liberal government that the Poor Law would have to be re-evaluated and the workhouses completely abolished. It was mainly the New Liberals that saw the need for social security and 'freedom for all', but it was clear to the entire party that the working classes had to be kept on side. ...read more.

be in prime condition to be called upon as a fighting force when needed; in no time Britain would be heading the industrial front again. Moreover, these reforms would pay for themselves and allow excess wealth to be spent on re-armament - an important factor when considering the increasing probability of European warfare. It was the confluence of these social, economic and political factors that meant that the Liberals had no choice but to implement social reform. For the Liberals, the beginning was really the Old Age pensions act which was enacted in 1908. The People's budget of 1909 and the subsequent constitutional crisis of 1911 only helped to further Liberalist aims, influencing reforms dealing with the sick, infirm, unemployed, widowed and children. Though some of the reasons for enacting these policies were selfish, sometimes superficial and made for political expediency, many of these reforms did a lot of good and were the beginnings of what is now the welfare state. Lloyd George himself said 'No country can be called civilised that allows them [orphans] to starve'. The New Liberalism ideal of a fairer and more secure state was all but achieved. However, it was only one of many aspects influencing the government's eventual decision. 1,249 ?? ?? ?? ?? Edijana Obiakpani-Guest Mrs. Roberts ...read more.