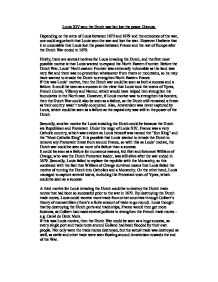 Louis XIV won the Dutch war but lost the peace. Discuss. Depending on the aims of Louis between 1672 and 1679 and the outcomes of the war, one could argue both that Louis won the war and lost the war. However I believe that it is undeniable that Louis lost the peace between France and the rest of Europe after the Dutch War ended in 1679. Firstly, there are several motives for Louis invading the Dutch, and the first most possible motive is that Louis wanted to expand his North Eastern Frontier. Before the Dutch War, Louis' North eastern Frontier was extremely vulnerable as the land was very flat and there was no protection whatsoever from rivers or mountains, so he may have wanted to invade the Dutch to strengthen North Eastern France. If this was Louis' motive, then the Dutch war could be seen as both a success and a failure. It could be seen as a success in the view that Louis took the towns of Ypres, French Comte, Villeroy and Namur, which would have helped him strengthen his boundaries in the North east. ...read more.

Louis thought that by destroying the Dutch ports and trade ships, France would then get more business, as Colbert had made several policies to strengthen the French trade routes - e.g. Canal de Deux Mers. If this was Louis motive, then the Dutch War could be seen as a huge success, as every single port and trade route around Holland had been flooded by their own people. Not only were the trade routes destroyed, but the actual trade was destroyed as well, as cattle and other trade were seen floating around Amsterdam towards the end of the War. Another motive that Louis could've had for invading the Dutch could be revenge. Louis and France had been greatly betrayed in the War of Devolution, which took place between 1667 and 1668. In the War of Devolution, Louis tried to claim several important towns, both in and around the Spanish Netherlands, e.g. - Lille. The Dutch had betrayed Louis in this War as, oblivious to the fact that France had protected them in the past; they had the effrontery to combine with the Swedes and the English against their benefactor. ...read more.

e.g. the battle of Sole Bay in 1672, where the rejuvenated French fleet were destroyed by the Dutch under de Ruyter. However as I've mentioned before, Louis did not manage to kill the Dutch leader, William of Orange so in that view the War could be seen as a failure. I believe that because of the outcome of the Dutch War, Louis did lose the peace between himself and other countries. There was the anti French coalition in 1673 formed by Leopald I, Spain, Netherlands and Lutherans from anti-French covenant. There was also the Triple-Alliance in 1668, where England, Netherlands and Sweden signed the Alliance against French. By committing atrocities in Holland, French troops had behaved badly by the standards of the age, provoking widespread criticism from other countries. This could be another reason why Louis lost the peace, as many other countries frowned upon the French actions during the War. However, Louis didn't lose the peace completely, as the Elector of Brandenburg wrote, "In the present state of affairs it seems that no prince will henceforth find security and advantage except in the friendship and alliance of the King of France"..later that year, the city of Paris bestowed the title of 'Great' on Louis. ...read more.