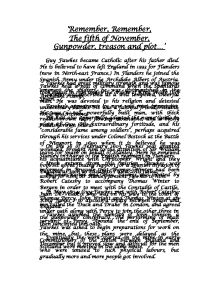 'Remember, Remember, The fifth of November, Gunpowder, treason and plot...' Guy Fawkes became Catholic after his father died. He is believed to have left England in 1593 for Flanders (now in North-east France.) In Flanders he joined the Spanish Army under the Archduke Albert of Austria. Fawkes held a post of command when the Spaniards took Calais in 1596 under the orders of King Philip II of Spain. Fawkes had great military strength and was famous amongst the soldiers, he was distinguished in the Archduke's camp. ...read more.

Nieuport in 1600 when it is believed he was wounded, brought him to the attention of Sir William Stanley in charge of the English regiment in Flanders. On the 16 of February 1603 Fawkes was granted leave for Spain on behalf of Stanley. Here he renewed his acquaintance with Christopher Wright and they both set about finding support for a Spanish invasion of England as soon as Elizabeth I died. This failed. Upon return from this mission, Fawkes was informed in Brussels that Thomas Winter had been asking for him, Sir Stanley present Fawkes to him. ...read more.

The performing of mass then sanctified this oath. Fawkes assumed the identity of John Johnson, a servant of Percy. Around the end of September, Fawkes was asked to begin preparations for work on the mine, but these plans were delayed as the Commissioners of the Union between England and Scotland were meeting in the same house. Eventually the work started on the mine in early December but it proved slow and difficult for the men who were unused to such physical labours, but gradually more and more people got involved. ...read more.