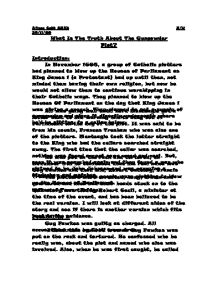 What Is The Truth About The Gunpowder Plot?

Alison Cobb 8HAB H/W 29/11/00 What Is The Truth About The Gunpowder Plot? Introduction: In November 1605, a group of Catholic plotters had planned to blow up the Houses of Parliament as King James 1 (a Protestant) had up until then, not minded them having their own religion, but now he would not allow them to continue worshipping in their Catholic ways. They planned to blow up the Houses Of Parliament on the day that King James 1 was giving a speech. They planned to get a supply of gunpowder and place it directly underneath where he'd be sitting, in a cellar below. All was going well until Lord Monteagle got a letter sent to him warning him to stay out of Parliament on the day of the plot. It was said to be from his cousin, Frances Tresham who was also one of the plotters. Monteagle took the letter straight to the King who had the cellars searched straight away. The first time that the cellar was searched, nothing was found accept some wood and coal. But, soon it was searched again and they found a man who claimed to be John Johnson and was carrying a tinderbox and matches. ...read more.

I don't think this is the correct possibility as there is not any evidence to back it up. Possibility 3: Robert Cecil - a Protestant and the King's Chief Minister - planned the whole thing. Guy Fawkes and the rest of the plotters were framed by Cecil. If Cecil had done this plan it would have meant that firstly he'd be getting revenge on the Catholics that he really didn't like, and secondly, he'd be liked very much by the King and may even get a promotion as it'd seem like he was saving the King's life if he mysteriously captured the plotters just before the plot was due to take place. Guy Fawkes confessed on the rack on the 9th of November and told them who was involved, but somehow the government managed to arrest the other plotters early on the 5th of November even though Guy Fawkes had not yet told them the other people's names. If Cecil had framed them then this piece of evidence backs it up as it shows he already had everything planned and so knew what was about to happen next. At the trial, no witnesses were called as there were none to back it up as it was not true and if there were any then they would tell the truth about the whole plot and Cecil's story would then be mucked up. ...read more.

Robert Catesby, Thomas Percy and other plotters were well known as Catholic conspirators (the had been in trouble before) and so it was quite likely that they would be again. How could Cecil have found out? Robert Cecil employed spies and informers on all important Catholics. This way, he could have easily found out about the plotter's plans in the first place. Evidence that Cecil helped the plotters: Thomas Percy rented a cellar near the Houses of Parliament froma man employed by the Government and friend of Cecil. This man died suddenly on the morning of November 5th which meant that conveniently he could not be a witness. Gunpowder could only be obtained from the Tower of London. The sales were controlled by the Government and so Cecil was able to get hold of it but when the records for the sale of gunpowder went missing, Cecil refused to permit any investigation. Also, Cecil, being Chief minister had the power to move the KIng's dates around and the King's speech at Parliament was put off to November 5th, the exact day the plotters needed. Conclusion: I think that the more believable story is possibility 4 as it just fits in better and the evidence is more strong and pacific compared to all the other possibilities which all seem to have tons of holes in the story lines. ...read more.