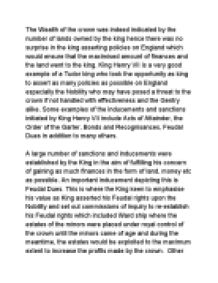 The handling of the Finances was King Henry VII's most successful domestic achievement. How far do you agree?

﻿The Wealth of the crown was indeed indicated by the number of lands owned by the king hence there was no surprise in the king asserting policies on England which would ensure that the maximised amount of finances and the land went to the king. King Henry VII is a very good example of a Tudor king who took the opportunity as king to assert as many policies as possible on England especially the Nobility who may have posed a threat to the crown if not handled with effectiveness and the Gentry alike. Some examples of the inducements and sanctions initiated by King Henry VII include Acts of Attainder, the Order of the Garter, Bonds and Recognisances, Feudal Dues in addition to many others. A large number of sanctions and inducements were established by the King in the aim of fulfilling his concern of gaining as much finances in the form of land, money etc as possible. ...read more.

Order of the Garter was a privilege and honour reserved for the King?s closest servants proving rather effective to Henry VII as the receipt received prestige but no lands or power was given to them. 37 knights of Garter were created by the King VII with more than half being given to the King?s closest associates in war and government eg Sir Reginald Bray, Richard Lord Willoughby de Broke, Giles lord of Daubeney and the Earl of Oxford. This demonstrated as an excellent way of gaining loyalty but also maintaining the lands and the power that was so valuable to the crown. Furthermore, Patronage which was also an inducement was when titles, Finance, land, power etc was given to the loyal Nobleman and Gentry. However, it was clear by Henry VII that Patronage came as a result of good and loyal service and was not posing as an incentive for loyalty. ...read more.

However, to maintain his Finances for this inducement, King Henry VII took complete use of another one of his sanctions the Acts of Attainder where people were unable to possess land or inherit it leading to Social and Economic Ruin. These lands were given as Patronage to the loyal preventing the decline of Finances to the crown. Nevertheless, this was also used as a ?sanction for good behaviour? as this could lead to the undoing of the sanction eg Thomas Howard had his lands taken away by the King. To conclude, Henry VII was very decisive in how to handle the Finances leading to a lot of success. The handling of the Finances was indeed the most important in gaining successful domestic achievement mainly due to the fact that each domestic policies were subconsciously heavily linked to Finance. King Henry VII used one of his policies to benefit him in other policies maximising the effect of Finance on domestic achievement to fullest eg Patronage and Acts of Attainder were somewhat connected. ...read more.