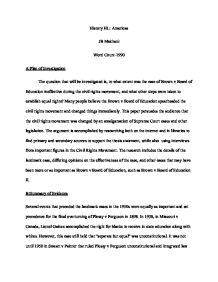 The question that will be investigated is, to what extent was the case of Brown v Board of Education ineffective during the civil rights movement, and what other steps were taken to establish equal rights?

History HL: Americas JB Makhani Word Count-1990 A:Plan of Investigation The question that will be investigated is, to what extent was the case of Brown v Board of Education ineffective during the civil rights movement, and what other steps were taken to establish equal rights? Many people believe the Brown v Board of Education spearheaded the civil rights movement and changed things immediately. This paper persuades the audience that the civil rights movement was changed by an amalgamation of Supreme Court cases and other legislation. The argument is accomplished by researching both on the internet and in libraries to find primary and secondary sources to support the thesis statement, while also using interviews from important figures in the Civil Rights Movement. The research includes the details of the landmark case, differing opinions on the effectiveness of the case, and other cases that may have been more or as important as Brown v Board of Education, such as Brown v Board of Education II. B:Summary of Evidence Several events that preceded the landmark cases in the 1950s were equally as important and set precedence for the final overturning of Plessy v Ferguson in 1898. In 1938, in Missouri v Canada, Lionel Gaines accomplished the right for blacks to receive in state education along with whites. However, this case still held that "separate but equal" was unconstitutional. ...read more.

these institutions," they seek to show that the landmark case of Brown v Board of Education did not solve the civil rights crisis.9 In fact, they claim that in order to bring a equal representation, African Americans must begin from the top, by giving incentive programs to black students in colleges. Differing from Ruderman and Fauver, the interview with John Hope Franklin describes the sentiment of people after Brown v Board of Education shows the disappointment people felt weeks and months following the verdict. John Hope Franklin was a NAACP member as well as a colleague of Thurgood Marshall. His important testimony gives insight to the effects of the Brown v Board of Education case in that it was not entirely ineffective.10 Many claim that the decision "overshadows the well-established fact that racial disparities in school resources in the South began narrowing 20 years before the Brown decision."11 Thurgood Marshall became the 1st black Supreme Court Justice, the NAACP gained in strength, and people began to believe in an equal society. Although mainly symbolic to the legislation for equality, the Brown case overturned the devastating Plessy v Ferguson case that had previously quelled black sentiment. When Hugh Speer testified about the psychological effects segregation has on black children, not only the case at hand but also the entire civil rights movement turned on its head. ...read more.