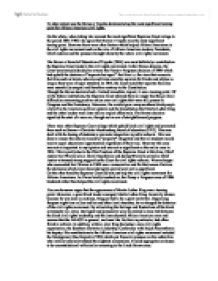 To what extent was the Brown v Topeka decision/ruling the most significant turning point for African American civil rights.

To what extent was the Brown v Topeka decision/ruling the most significant turning point for African American civil rights. On the whole, when taking into account the most significant Supreme Court rulings in the period 1865-1992 I do agree that Brown v Topeka was the most significant turning point. However there were other factors which helped African Americans in the civil rights movement such as the role of African American leaders, Presidents, Chief Justices and the pressure brought about by the whole civil rights movement. The Brown v Board of Education of Topeka (1954) was most definitely a contribution the Supreme Court made to the civil rights movement. In the Brown decision, the Court unanimously decided to reverse the Plessy v Ferguson decision of 1896 which had upheld the doctrine of "separate but equal" facilities i.e. the view that access to facilities such as hotels, schools and trains could be separate for blacks and whites as long as they were of equal standard. ...read more.

As I have briefly touched on, the Plessy v Ferguson case of 1896 hindered rather than helped the civil rights movement. You can however argue that the appearance of Martin Luther King was a turning point. Moreover, a great black leader emerged, Martin Luther King. Ironically chosen because he was seen as cautious, King proved to be a great motivator. Organizing frequent night time rallies and his and other local churches, he re-charged the batteries of the civil rights movement. By articulating the feelings and frustrations of the black community in a clear, intelligent and persuasive way, he created a close link between the black civil rights leadership and the less educated African American man and woman that the NAACP in general, and men like Du Bois in particular, had often failed to achieve. In addition, within a year King had setup a new civil rights organisation, the Southern Christian Leadership Conference with Ralph Abernathy as his deputy. His contributions to the African American civil rights movement included the Montgomery Bus Boycott of 1956 which put financial pressure on the authorities who initially unwisely refused the slightest concessions. ...read more.

The role of two liberal Presidents, John F Kennedy and his successor Lyndon B Johnson can in fact be seen as a turning point and a change in the continuity of Presidents role in the African American civil rights movement. The assassination of President Kennedy in November 1963 as he was preparing a Civil Rights Bill seemed to be a setback for the movement. However the new president, Johnson, needed little persuasion to act. He skilfully exploited the shocked mood of the American people after the death of Kennedy to pass the Civil Rights Act of 1964 which made universal what was already happening in many areas of the US but not in the Deep South. It was a major achievement and the southern resistance had been largely affected. In addition to this Johnson also passed the Voting Rights Bill in 1965 which was a great success and can indeed be seen as a turning point. However I do not believe that Presidents role in the African American civil rights movement was as important over the period 1865-1992 as the Supreme Court Rulings, namely Brown v Topeka. ...read more.