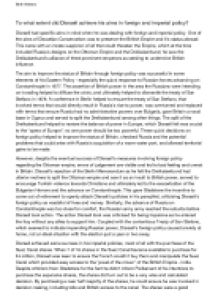 To what extent did Disraeli achieve his aims in foreign and imperial policy?

﻿Beth Walters To what extent did Disraeli achieve his aims in foreign and imperial policy? Disraeli had specific aims in mind when he was dealing with foreign and imperial policy. One of the aims of Disraelian Conservatism was to preserve the British Empire and it?s status abroad. This came with an innate suspicion of all that could threaten the Empire, which at the time included Russia?s designs on the Ottoman Empire and the Dreikaiserbund; he saw the Dreikaiserbund?s alliance of three prominent emperors as seeking to undermine British influence. The aim to improve the status of Britain through foreign policy was successful in some elements of his Eastern Policy - especially the quick response to Russian forces advancing on Constantinople in 1877. The assertion of British power in the area the Russians were intending on invading helped to diffuse the crisis, and ultimately helped to dismantle the treaty of San Stefano in 1878. A conference in Berlin helped to ensure the treaty of San Stefano, that involved terms that would directly result in Russia?s ...read more.

Coupled with the contentious Treaty of San Stefano, which seemed to indicate impending Russian power, Disraeli’s foreign policy caused anxiety at home, not an ideal situation with the election just a year or two away. Disraeli achieved some success in his imperial policies, most of all with the purchase of the Suez Canal shares. When 7 of 16 shares in the Suez Canal became available to purchase for £4 million, Disraeli was keen to ensure the French couldn’t buy them and manipulate the Suez Canal which provided easy access to the “jewel of the crown” of the British Empire - India. Despite criticism from Gladstone for the fact he didn’t inform Parliament of his intentions to purchase the expensive shares, the shares did turn out to be a very wise and calculated decision. By purchasing a near half majority of the shares, he could ensure he was involved in decision making, including tolls and British access to the canal. ...read more.

Disraeli?s judgments regarding the Bulgarian Horrors, South Africa and Afghanistan can be criticised as showing weakness in Disraeli?s policies and a failure to fulfil his aims regarding the balance of power and British power. However, Disraeli was successful in winning prestige for Britain through his quick and decisive dealings with the Suez Canal shares and Russia?s advance on Constantinople, but not without cost. He lost ministers and divided his cabinet over the Bulgarian Horrors, allowing Gladstone to attack him over his imperial issues in his Midlothian campaign. By the time the election came, British defeat in South Africa was at the forefront of the public?s minds, and no doubt influenced his defeat in election. Disraeli was successful in dealing with Russia, effectively asserting British authority over India and preventing the collapse of the Ottoman empire in some ways. Perhaps his oversights in imperial policy were a result of his exuberant style of speaking, which could be said to promote a forward, aggressive imperial policy, leading his representatives abroad to feel they were acting the way he would want them to. ...read more.