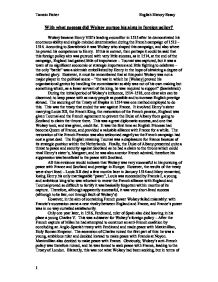 With what success did Wolsey pursue his aims in foreign policy?

With what success did Wolsey pursue his aims in foreign policy? Wolsey became Henry VIII's leading councillor in 1515 after he demonstrated his enormous ability and single-minded determination during the French campaign of 1513 - 1514. According to Scarisbrick it was Wolsey who shaped this campaign, and also where he proved his competence to Henry. If this is correct, then perhaps it could be said that this foreign policy aim was pursued with very little success, as in 1514, at the end of the campaign, England had gained little of importance - Tournai was captured, but it was a town of no significant economic or strategic importance and little fighting to celebrate - the only "battle" was a skirmish embellished by Henry in the hope of obtaining a degree of reflected glory. However, it must be remembered that at this point Wolsey was not a major player in the political scene - "the war in which he [Wolsey] proved his organisational genius by handling the commissariat so ably was not of his own making but something which, as a lesser servant of the king, he was required to support" (Scarisbrick) ...read more.

Since he had barred the formation of an Anglo-Spanish alliance, Wolsey therefore had to secure England's position with France instead, to ensure England had an ally and was not diplomatically isolated. Therefore the costly extravaganza of the Field of the Cloth of Gold was held - apparently a meeting between the two leaders, Francis and Henry, but in reality a display of their wealth in an attempt to outdo the other. At the same time it was an opportunity for Wolsey to discuss matters with Francis. However, Wolsey was a realist and could see by now that if they were dragged into a war with Spain on France's side, as was promised in the Treaty of London, they would not emerge victorious. He therefore conducted secret meetings with Charles and they decided to launch a 'Great enterprise' against France in 1523, in the treaty of Bruges. This is a success in that it supports Scarisbrick's theory that Wolsey's aim was to create peace through unbalance of power: he would support the stronger side in order to prevent the weaker one from doing anything. ...read more.

A good example is the Treaty of London, which Wolsey engineered, whose aim was to provide peace for the whole of Europe. However, Scarisbrick also says "Between 1514 and 1528, when Wolsey was in charge, England was on the brink of war twice. Therefore, his policy failed because it was unrealistic and perhaps even self-contradictory" Another view however, as held by Pollard, was that Wolsey's foreign policy was very much dictated by the Pope: "England was tied to the Papacy not out of any loyalty to a divine institution but because Wolsey was always wanting something from it" Because of this Wolsey followed local Italian politics "without regard for her [England's] own interests and in response only to his own devouring ambition" This would explain the rather nefarious policies and recurrent Volte-faces Wolsey carried out, but it would also infer that England's foreign policy at this time was entirely Wolsey's, which is rather an aberrant view, and one which most eminent historians would disagree with. Therefore, in conclusion, it was with little long-term success that Wolsey pursued his foreign policy - whilst rewards like Tournai and ephemeral diplomatic prowess were good at the time, he achieved little of any long-term eminence, which surely shows that he was not very successful. Tamsin Fisher English History Essay 1 ...read more.