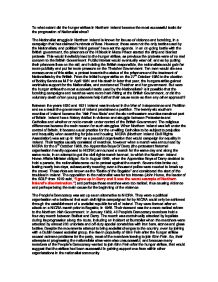 To what extent did the hunger strikes in Northern Ireland become the most successful tactic for the progression of Nationalist aims?

To what extent did the hunger strikes in Northern Ireland become the most successful tactic for the progression of Nationalist aims? The Nationalist struggle in Northern Ireland is known for its use of violence and bombing, in a campaign that has claimed hundreds of lives. However, these were not the only tactics used by the Nationalists, and political "mind games" have set the agenda. In an on-going battle with the British government, the prisoners of the H Block in Maze Prison started the dirty and blanket protests. This would inevitably lead to the hunger strikes, as previous the protests were of no real concern to the British Government. Public interest would eventually wear off, and so by putting their prisoners lives on the rail, and holding the British responsible, the nationalists could gain far more publicity and put far more pressure on the Thatcher Government. Ten men would die as a consequence of this strike, a protest towards the status of the prisoners and the treatment of Nationalists by the British. From the initial hunger strike on the 27th October 1980 to the election of Bobby Sands as M.P in April 1981 and his death in later that year, the hungers strike gained worldwide support for the Nationalists, and condemned Thatcher and her government. But were the hunger strikes the most successful tactic used by the Nationalists? Is it possible that the bombing campaigns and marches were more hard-hitting at the British Government, or did the voluntary death of ten young prisoners help further their cause more so then any other approach? Between the years 1920 and 1921 Ireland was involved in the War of Independence and Partition and as a result the government of Ireland proclaimed a partition. The twenty-six southern counties of Ireland became the 'Irish Free State' and the six northeastern counties remained part of Britain. Ireland has a history riddled in violence and struggle between Protestants and Catholics and whether or not to remain under control of the British Government. ...read more.

It was not just the IRA prisinoners and Sinn Fein politicians who felt there was injustice in Northern Ireland. "There can be no question of political status for someone who is serving a sentence for crime. Crime is crime is crime. It is not political, it is crime", Margaret Thatcher's famous quote after Bobby Sands was elected MP, marking that the Government were still not going to back down. Meanwhile, other tactics being used involved the severe bombing of Unionist areas and a few campaigns in Britain. The pub bombings in Birmingham and Guildford in 1974 had set the tone for IRA attacks on the British at home. These two attacks combined produced 26 fatalities and over 200 injured. The death of Lord Mountbatten, a close friend of Thatcher's, could be considered a defining moment in the nationalist struggle, but it may also be seen as making Thatcher more determined to clamp down on the violence and protests and secure British rule in Northern Ireland. On that same day Mountbatten was killed, the Provisional IRA also killed eighteen British Army soldiers from the Parachute Regiment. In 1984, two years after the end of the hunger strikes, bombs were let off in Brighton during a party conference, almost killing Margaret Thatcher herself, which certainly helped in bringing the situation in Ireland home. The IRA made no effort to hide there intentions were to kill Thatcher; "Today we were unlucky, but remember we only have to be lucky once. You will have to be lucky always." But the fact that the IRA felt they needed to re-engage with the British surely means that the effects of the hunger strike had worn off and in fact no progress had been made. However, before this b**b attack the troubles had been considered a foreign affair, but by endangering the lives of top politicians and innocent members of public on the mainland, it was helping to ring the alarm bells of the conservative government. ...read more.

They also acknowledged the nationalist desire for a united Ireland. Under the Agreement, voters elected a new Northern Ireland Assembly to form a Northern Irish parliament. Ulster Unionist party leader David Trimble became First Minister of Northern Ireland. The Deputy Leader of the SDLP, Seamus Mallon, became Deputy First Minister of Northern Ireland, though his party's new leader, Mark Durkan, subsequently replaced him. The Ulster Unionists, SDLP, Sinn F�in and the Democratic Unionist Party each had ministers by right in the power-sharing assembly. A quote from Fionnuala O Connor's book 'In Search of a State', "How do Catholics in Northern Ireland see themselves? Do they still believe they are trapped in an 'alien state'? While northern nationalists were once regarded as 'politically helpless, hopeless and cynical', many Catholics are now part of the political and economic mainstream," shows us that Catholics were no longer subject to inequality or prejudice. There was no way that the problems in Ireland could be fixed to accommodate all 8 parties wishes, but so far this is the greatest compromise that's been on offer. So, were the hunger strikes the successful tactic for the progression of Nationalist aims? I would argue that they may not have been the sole reason for the progression, but they helped show a less violent side to the IRA. The bombs in London were a great tactic, in that they showed the British Government that the IRA were prepared to extent the violence onto the mainland if it meant pushing for a new treaty. But if it were not for the hunger strikes then there would not have been the media coverage of the troubles that there eventually was. They gave a more emotional side to the situation, and it helped republicans and nationalists throughout the catholic community bond together against the prejudice. I feel that had there not been the hunger strikes, the British Government would have abandoned Ireland to diminish into a country of constant violence. . ...read more.