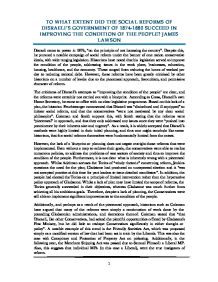 To what extent did the social reforms of Disraeli(TM)s government of 1874-1880 succeed in improving the condition of the people?

Disraeli came to power in 1874, "on the principle of not harassing the country". Despite this, he pursued a notable campaign of social reform under the banner of one nation conservative ideals, with wide ranging legislation. Historians have noted that his legislation served to improve the condition of the people, addressing issues in the work place, businesses, education, housing, healthcare, and the economy. These ranged from reducing the hours of worked per day to reducing national debt. However, these reforms have been greatly criticised by other historians on a number of levels: due to the piecemeal approach, favouritism, and permissive character of reform. The criticisms of Disraeli's attempts to ''improving the condition of the people' are clear, and the reforms were certainly not carried out with a blueprint. According to Cross, Disraeli's own Home Secretary, he came to office with no clear legislative programme. Based on this lack of a plan, the historian Feuchtwanger commented that Disraeli was "disinclined and ill equipped" to initiate social reform, and that the conservatives "were not motivated by any clear social philosophy". Coleman and Smith support this, with Smith stating that the reforms were "piecemeal" in approach, and that they only addressed any issues once they were "pushed into prominence by their inherent size and urgency". ...read more.

of proposals is irrelevant to the question, and a near Liberal policy, taken on by the Conservatives, still had potential to improve the condition of the people. The Friendly Societies Act attempted to establish registration and improve their financial stability and thus made a notable contribution. In addition, the Conservatives were able to significantly contribute to the development of a mature capitalist relationship between workers and employers, in Disraeli's words, "settling the position of Labour for a generation". Many historians also criticise the reforms directly, sceptically stating that those that were produced, were either highly limited in their impact on the condition of the people or biased towards Conservative supporters; and thus Disraeli exaggerated the effects. Legislation such as the Agricultural Holdings Act, and the Artisan's Dwellings Act were highly permissive in their nature, relying on the choices of local bodies to instigate change; by 1881 (6 years later) only 10 out of 87 towns (around 1 in 8) had taken any action under the Artisan's Dwelling Act. Norton and Aughey argue that the social reforms provided "no opposition to established orthodoxies about the sanctity of property and the role of the state in the economy" and thus were limited in their impact. ...read more.

Education was also on the agenda, and the Education Act of 1876 set up School Attendance Committees. These increased pressures on working-class parents to enrol their children in schools, in attempt to reap the benefits of education, namely increases in human capital, and neighbourhood effects (positive externalities). Thus, the condition of the people was improved in the long term, as well as in the short term by the reforms mentioned above, and in the economy: in shipping, Friendly Societies, and through a general policy of limited duties and tax (although these fluctuated). Whilst many historians criticise the lack of planning, and the origins of policy, this did not limit the effect of reforms. Furthermore, whilst some measures permissive in nature or limited, on balance it is clear that Disraeli's government had great success in improving the condition of the people. Not only did they help the working classes through union and factory reform, but made significant measures that helped the general population, improved conditions around Britain, brought social issues to the forefront of current debate and addressed numerous areas with lasting impacts; ranging from housing to health, education and the economy. ?? ?? ?? ?? 3 TO WHAT EXTENT DID THE SOCIAL REFORMS OF DISRAELI'S GOVERNMENT OF 1874-1880 SUCCEED IN IMPROVING THE CONDITION OF THE PEOPLE? JAMES LAWSON 1 ...read more.