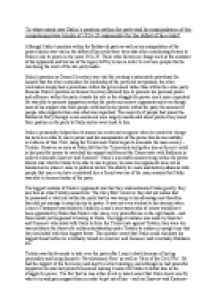 To what extent was Stalins position within the party and his manipulation of the competing power blocks of 1924-29 responsible for the defeat of his rivals?

﻿To what extent was Stalin?s position within the party and his manipulation of the competing power blocks of 1924-29 responsible for the defeat of his rivals? Although Stalin?s position within the Bolshevik party as well as his manipulation of the power blocks was vital in the defeat of his rivals there were also other contributing factors to Stalin?s rise to power in the years 1924-29. These other factors are things such as the mistakes of his opponents and his use of the legacy left by Lenin in order to convince people that he was doing the work of the late party leader. Stalin?s position as General Secretary was vital for creating a nationwide powerbase for himself that the other contenders for leadership of the party did not possess, the other contenders simply had a powerbase within the government rather than within the entire party. Because Stalin?s position as General Secretary allowed him to promote his personal power and influence within the party it made his role in the struggle for power much more important. ...read more.

It was not even evident to his enemies when Lenin?s Testament was leaked to Stalin by Lenin?s secretaries who of course would have been appointed by Stalin that Stalin?s role was a very powerful one in the right hands ? and those hands just happened to belong to Stalin. The biggest mistake was made by Zinoviev and Kamenev who sided with Stalin to form the Triumvirate against Trotsky, they were too worried about the threat of a military dictatorship under Trotsky to realise in enough time that they had sided with their biggest threat. This mistake meant that Stalin could eliminate his biggest threat before he eventually turned on Zinoviev and Kamenev and eventually Bukharin too. Trotsky was the favourite to take over the party after Lenin?s death because of his big personality and being donned a ?Revolutionary Hero? as well as ?Hero of the Civil War?. He had the support of the Red Army and kept to a strict ideology, and although he had powerful supporters he also had powerful enemies making it easier for Stalin to defeat him in the struggle for power. ...read more.

Stalin had Lenin?s body embalmed and put on display against the wishes of Lenin?s family to try and create a further image of importance about the former leader that he could use in order to show that he had been very loyal to Lenin so that the people would see him as a good contender to take over the leadership of the party. In conclusion, it is evident that without his powerful position within the party that helped create a large powerbase for himself, Stalin would not have been able to rise to power and defeat his rivals in the years 1924-29. He successfully manipulated his friends and rivals, playing them off each other to his own advantage so that he could eliminate them as a threat against him getting into power. However, there were other factors that also allowed Stalin to rise to power, but these other factors such as the mistakes of his opponents, are not quite as vital as Stalin?s position within the party. ...read more.