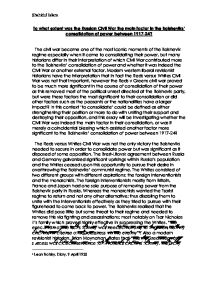 To what extent was the Russian Civil War the main factor in the Bolsheviks' consolidation of power between 1917-24? The civil war became one of the most iconic moments of the Bolshevik regime especially when it came to consolidating their power, but many historians differ in their interpretation of which Civil War contributed more to the Bolsheviks' consolidation of power and whether it was indeed the Civil War or another external factor. Modern western liberal revisionist historians have the interpretation that in fact the Reds versus Whites Civil War was not that important, however the Reds v Greens civil war proved to be much more significant in the course of consolidation of their power as this removed most of the political unrest directed at the Bolshevik party, but were these factors the most significant to their consolidation or did other factors such as the peasants or the nationalities have a larger impact? In this context 'to consolidate' could be defined as either strengthening their position or more to do with uniting their support and destroying their opposition, and this essay will be investigating whether the Civil War was indeed the main factor in their consolidation, or was it merely a coincidental blessing which assisted another factor more significant to the Bolsheviks' consolidation of power between 1917-24? The Reds versus Whites Civil War was not the only victory the Bolsheviks needed to secure in order to consolidate power but was significant as it disposed of some opposition. The Brest-Litovsk agreement between Russia and Germany galvanized significant uprisings within Russia's population and the Whites ceased upon this opportunity to pursue their desire in overthrowing the Bolsheviks' communist regime. The Whites consisted of two different groups with different aspirations: the foreign interventionists and the monarchists. The foreign interventionists mostly from Britain, France and Japan had one sole purpose of removing power from the Bolshevik party in Russia. ...read more.

This intense atmosphere of hostility was being emitted mainly from countries such as: Georgia, Armenia, Azerbaijan and most notably Ukraine. All theses nationalities hated the Reds and the Whites equally as much however Ukraine posed the most direct threat to the Bolsheviks regime by creating their own anarchist army and establishing independence. The Bolsheviks now had the task of re-conquering these countries but this was not easy. "In 1920, overt opposition intensified. A rural rebellion gripped...Ukraine...were bases for peasant fighters"12 and the Bolsheviks had to make some appeasements "Territory densely inhabited by non-Russians was given favourable dispensation. Ukraine, Belorussia, Estonia and Latvia acquired their own soviet republics that...had equal status to the RSFSR"13. This illustrates that this threat which these nationalities showed were enough to actually force gaining their own soviet republics which arguably is more than what the Greens or Whites could achieve in their struggles which made this a crucial factor to the Bolsheviks consolidation of power. Also the fact that both of these sources are derived from a respected modern revisionist historian who has analysed fresh new evidence makes these highly credible sources. However, the Bolsheviks acknowledged that federalism was a necessity and the formation of the largest federation in the world in 1922: the Union of Soviet Socialist Republics (USSR) was created. But this appeasement needed to be reinforced by Red Terror to ensure that not only could the Bolsheviks display an authoritative position but to also ensure that these nationalities did not become over-confident with their new status. This suppression of the nationalities was one of the main reasons to establishing the Cheka was a certain indication that there were fully committed to trying not only to survive this uprising but to also resist opposition from various groups which were opposing but also to consolidate their power during or after all this. This removal of opposition by them helped immensely as they were able to install fear into the opposition with ruthless executions thus leading to them wiping out remnants of popular movement; known as "Red Terror". ...read more.

They did force the Bolsheviks to make appeasements such as the New Economic Policy (NEP) which helped the Bolsheviks also with their economic problems. However the peasants' threat was easily neutralised as the operations of the Cheka implemented fear into the peasants and as a result stopped their revolutionary actions. Although all three of these groups were incredibly vital to quell in order for the Bolsheviks to consolidate power, the nationalities I believe were the most important group to quell as they attained the most significant appeasement from the Bolsheviks and proved to be the hardest opposition to get rid off as they needed to use red terror for this. 1 Leon Trotsky, Diary, 9 April 1935 2 Brian Moynahan, The Russian Century, 1994 3 A Short Historian of the Communist Party of the Soviet Union (1970 edition) 4 G.Swain, The Origins of the Russian Civil War (Longman ,1996) 5 Stephen J. Lee, Lenin and Revolutionary Russia (Routeledge, 2003) 6 Decree by Sverdlov, chairman of the Central Executive Committee, 22 April 1918 7 G.Swain, The Origins of the Russian Civil War (Longman, 1996) 8 V.P.Butt, A.B. Murphy, N.A. Myshov and G.Swain, The Russian Civil War: Documents from the Soviet Archives (Macmillan 1996) 9 Extract from the Komuch programme, June 1918 10http://pubs.socialistreviewindex.org.uk/isj86/trudell.htm (18 October 2007) 11 Trotsky's order to Red Army troops on the southern front, 24 November 1918 12 Robert Service, The Russian Revolution 1900-1927 (Palgrave Macmillan, 1999) 13 Robert Service, The Russian Revolution 1900-1927 (Palgrave Macmillan, 1999) 14 Official document establishing the strategy of the Cheka, 12 June 1918 15 Richard Radway, Russia and the USSR, 1996 16 Russia 1914-41, Y. Kukushkin: History of the USSR (1981) 17 Russia 1914-41, V.Serge: From Lenin to Stalin (1937) 18 The Origins of the Russian Civil War, Trotsky's response to the soviet executive, 29 November 1917 19 R.Service, The Russian Revolution 1900-1927 20 R.Service, The Russian Revolution 1900-1927 ?? ?? ?? ?? Shahidul Islam ...read more.