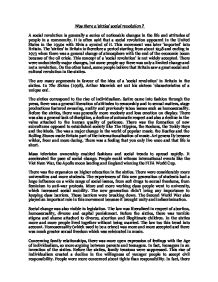 Was there a 'Sixties social revolution' ?

Was there a 'sixties' social revolution ? A social revolution is generally a series of noticeable changes in the life and attitudes of people in a community. It is often said that a social revolution appeared in the United States in the 1950s with Elvis a symbol of it. This movement was later 'imported' into Britain. The 'sixties' in Britain is therefore a period starting from about 1958 and ending in 1973 when there was a general change of atmosphere with the end of the economic boom because of the oil crisis. This concept of a 'social revolution' is not widely accepted. There were undoubtedly major changes, but some people say there was only a limited change and not a revolution. On the other hand, some people believe that Britain saw a great social and cultural revolution in the sixties. The are many arguments in favour of the idea of a 'social revolution' in Britain in the sixties. In The Sixties (1998), Arthur Marwick set out his sixteen 'characteristics of a unique era'. ...read more.

There was the expansion on higher education in the sixties. There were considerably more universities and more students. The experiences of this new generation of students had a huge influence on a wide range of social issues, from soft drugs to s****l freedoms, from feminism to anti-war protests. More and more working class people went to university, which increased social mobility. The new generation didn't bring any importance to keeping class barriers. These barriers were breaking down. The Second World War also played an important role in this movement because it brought unity and indiscrimination. Social change was also visible in legislation. The law was liberalized in respect of abortion, homosexuality, divorce and capital punishment. Before the sixties, there was terrible stigma and shame attached to divorce, abortion and illegitimate children. In the sixties more and more people lived together without being married. The law too this trend into account. Homosexuality (which used to be a crime) was more and more accepted and there was much greater s****l freedom which was celebrated in music. ...read more.

Immigration communities were segregated in urban areas. There was tension, r****m and discrimination, but laws controlled r****m and there was gradually more acceptance. Such a catalogue of social and cultural change provides very convincing evidence of a social revolution, both in fundamental 'new' changes and in the speeding up of changes already in motion. One key piece of evidence supporting the Marwick view is the fear and loathing that was revealed in the backlash against the new 'permissive society'. However, there are arguments against this 'revolution'. Some people say that there was only limited change and not a revolution, that there was more continuity than change. They say change cannot be neatly compartmentalised but is always part of a long-term ebb and flow. They say social change in the 1960s was regional and not universal: where it happened at all, it concerned mostly the educated middle classes. There were massive variations according to age, class or region. To conclude, there was undoubtedly a wave of significant social and cultural change in Britain in the sixties. Many peoples attitudes changed by following the concept of individualism. Nevertheless, this change didn't have any impact on a lot of people. There were important variations according to age, class or region. ...read more.