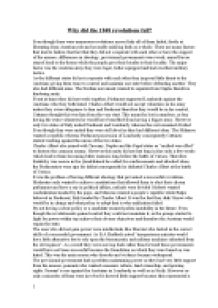 why did the 1848 revolutions fail.

﻿Why did the 1848 revolutions fail? Even though there were numerous revolutions across Italy all of them failed, firstly at liberating from Austrian rule and secondly unifying Italy as a whole. There are many factors that lead to failure; that fact that they did not cooperate with each other or have the support of the masses, differences in ideology, provisional governments were week, armed forces stayed loyal to the throne while the people gave their loyalty to their locality. The major factor was the Austrian army they were lager, better equipped and had excellent military tactics. As the different states did not cooperate with each other they imposed little threat to the Austrians giving them tome to control and maintain one state before defending another. They also had different aims. The Sicilian movement wanted to separate from Naples therefore hindering unity. Event at times they did not work together, Piedmont supported Lombardy against the Austrians who they both hated. Charles Albert would not accept volunteers in his army unless they swore allegiance to him and Piedmont therefore they would be in his control, Cattaneo thought this was him from the very start. ...read more.

divided Gioberti wanted confederation headed by the pope, and Mazzini wanted a people?s republic while Balpo believed in Piedmont, Italy headed by Charles Albert. It was the fact they didn?t know who would be in charge and what policy to adopt that is why unification failed. By not having a clear policy or a candidate ensured politic instability in the future. Even though the revolutionists gained control they could not maintain it, as the groups started to fight for power within top achieve their diverse objectives and therefore the Austrian would regain the state. The ones who did not gain power were intellectuals like Mazzini who lacked in the correct skills of a successful government. As B.A Haddock noted ?inexperience minister would have little alternative but to rely upon the bureaucratic and military machines inherited from the old regimes?. As a result they were moving back rather than forward these governments would have not been successful because the foundation on which they were based on was hated. This was the main reason why disorder and violence became widespread. ...read more.

By staying loyal to the throne, meant they had sworn on oath to defend the king not to attack him. What the Italians failed to realise was that they could not ?go it alone? therefore outside help was required. Another super power that had the great army, economy and organisation just like Austria. It was evident that France was the best candidate as they had already shown their strength in Rome when they supported the pope. Therefore there were many reasons why the revolutions failed firstly if all the states worked together and gained outside support of a superpower they would have easily overcome the Austrians. However as they had no intention of unifying they should have a more organised system of government with open minded strategies that would accomplish the aims of everyone including the peasants. Who they should have included as they were the people who made up the majority of the population. Charles Albert also added to the failure as he delayed in invading Lombardy to expel the Austrians and when he did take action the Austrians had already reinforced themselves after having suffered minor defeats as Milan Became out of control. ...read more.