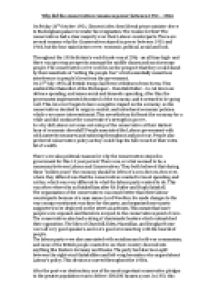 Why did the Conservatives remain in power between 1951 1964?

﻿Why did the conservatives remain in power between 1951 ? 1964 On Friday 26th October 1951, Clement Atlee, then liberal prime minister drove to Buckingham palace to tender his resignation. The reason for this? The conservatives had a clear majority over their Labour counterparts. There are several reasons why the Conservatives stayed in power between 1951 and 1964, but the four main factors were: economic, political, social and luck. Throughout the 1950s Britain?s world trade was at 25% - an all time high- and there was growing prosperity amongst the middle classes and most average people. The conservatives were voted in on the prospect that they would stand by their manifesto of ?setting the people free? which essentially meant less interference in people?s lives from the government. On 27th July 1953, all British troops had been withdrawn from Korea. This enabled the Chancellor of the Exchequer ? then Rab Butler ? to cut down on defence spending, and raises social and domestic spending. ...read more.

This was ofter referred to as Butskellism after RA Butler and Hugh Gaitskell. The organisation of the conservatives was much better than their labour counterparts because of a man names Lord Woolton. He made changes to the way young recruitment was done for the party, and organised more party supporters to be deployed on the street as activists. This meant that more people were exposed, and therefore swayed, to the conservatives point of view. The conservatives also had a string of charismatic leaders which outmatched their opposition. The likes of Churchill, Eden, Macmillan, and Douglas-Home were all very good speakers, and were good at connecting with the hoards of people. The labour party were also associated with socialism and cold war communism, and none of the British people wanted to see their country descend into anything like Eastern Germany and Russia. The party had also been split between the right wind Gaitskellites and left wing bevanites who argued about Labour?s policy. ...read more.

By the time the next election had come, people had forgotton about the scandal, and were concentrating on the there and then aspects of the party. The economy, which seemed to continue to thrive during their time in government, meant that people were better off than during the war, and that meant there was more money sloshing around the economy. There is nothing to suggest that the government did anything to boost the economy at that time, and that it was purely down to chance that the economy was in a ?boom? period. This also coincides with the point about the economic cycle being at the same time as the electoral cycle. Overall, I think that the 13 year period of the conservatives was purely down to their luck factor. Had it been a time of economic depression, the Labour party would have been more likely to be voted in because of their strategies to combat any economic downturn. It was also lucky that the Labour party was divided during these years and unable to make a joint conclusion on what the party policy should be. These are the three main factors ...read more.