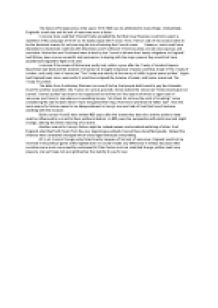 ﻿The failure of foreign policy in the years 1514-1525 can be attributed to many things. Undoubtedly, England?s small size and its lack of resources were a factor. In source 4 we read that ?[Henry] finally accepted the fact that royal finances could not support a repetition of the campaign of 1513? so he made peace with France. Here, Henry?s lack of resources seems to be the dominant reason for not pursuing his aim of winning the French crown. However, much must have depended on diplomatic relations with Maximilian and Ferdinand -?[Henry?s] allies proved unscrupulous and unreliable. ...read more.

Again had England been more resourceful it could have aligned the balance of power and hence preserved The Treaty of London. The letter from Archbishop Warham in source 6 tell us that people didn?t want to pay the Amicable Grant for another expedition into France on various grounds. Some lacked the resources ?Some would give but cannot?. Some say that ?last loan is not repaid and nor will this be? the reason of which is again lack of resources and Henry?s imprudence in spending money. Yet others do not see the point of invading France considering the last invasion which ?have not gained the King a foot more land than his father had?. ...read more.

In 400 years the perspective with which we look might change, altering the whole meaning of an event. Another reason for Henry?s failure might be indecisiveness and constant switching of allies. Had England allied itself with Spain from the very beginning eventually it would have benefited greatly. Instead the alliances were constantly changed which encouraged betrayals and plotting. All in all, Henry?s foreign policy failed mainly because of his lack of resources. England could not be involved in the political game at the highest level nor could it make any difference in military because other countries were much more wealthy and powerful.Other factors such as unskilled foreign politics must have played a role yet it was not as significant as the inability to pay for war. ...read more.