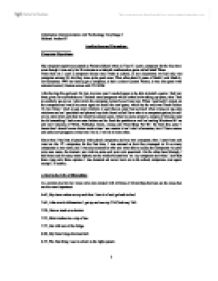 Information Communication And Technology Key Stage 3 Michael Archer 8F Applications and Extensions Computer Experience My computer experience started at Primary School when in Year 3 I used a computer for the first time even though it was only for 20 minuets on a babyish mathematics game called Math Three. From then on I used a computer almost once week at school, in our classrooms we had only one computer among 30, but they were quite good ones. Then after about 2 years of Math 3 and Math 4, for Christmas 1997 our family got a computer, it had a colour Cannon Printer, it was 26x speed with surround sound, Internet access and CD ROM. After having this god send for just over one year I needed space to be able to install a game I had just been given for my birthday so I deleted some programs which looked to be taking up space, then I had to suddenly go out so I shut down the computer correctly and went out. When I got back I turned on the computer and would try once again to install the new game, which by the way was Tomb Raider III, but when I tried to get onto windows it said that an error had accrued when trying to log onto windows and so I panicked and phoned my dads friend called Dave who is a computer genius, he told me to calm down and that he would be around soon, when he came around a couple of minuets later he did something I had never seen before and he fixed the problem as well as loading Windows 98' on and new versions of Word, Publisher, Excel, Access and Paint Shop Pro 98'. So from this story I learnt that I should never delete work unless I am certain it isn't vital information, but if Dave comes and adds new programs every time I do it, I will do it more often. ...read more.

This is a scare mainly related to canned food because they normally have long sell by dates. Morals and Ethics Many people have a computer, we as a society use them in our daily life and take them for granted, we don't appreciate the time and trouble that takes to build a computer. The only thing is that we don't think how dangerous they can be. They can sometimes crash and make people lose all there work and there wages, accounts and very important information. Although this only happens very rarely, it still does happen to people everyday. Still, computers have many uses, they can make jobs like filling and things like that go 10x as quick as doing it by hand. They are also about learning with intelligent and fun programs for exams and work in school/work. Of course the most popular thing on a computer is the Internet and playing games. My Dad uses his computer to write letters to his workmen and is company, here is what my Dad thought of computers know days. Q: How do Computers effect you? A: They are a great help and speed my work up by 10x, they are also great for finding out information and a quick and easy way to shop. Q: Are there any bad points? A: Yes, there are some bad points about computers, for example they can shut off conversation, some of the surcurity on the Internet is not as good as it should be, also if you by a expensive top of the range computer it will be out of date by the next month and that is quite irritating. But I believe that the good things over power the bad. In conclusion I say that computers will be essential in the near future and are a suberb example of human technology. Cellular Mobile Communication Michael Archer 8F Contents: Introduction Past Present Future Conclusion Introduction If you haven't got a Mobile Phone and you are in the business world then you are not well equipped to survive in the business world. ...read more.

For the first time ever SWATCH are planning to make there first mobile but this mobile will be placed on your wrist (like a normal watch) and it will have all the features of a top mobile. In the future I predict that you will be able to talk to your friends into anything. These ideas include wallets, shirts, pens/pencils, cameras, belts, binoculars, watches and the list could go on forever. Maybe in the far future humans will have mobiles inserted into there ears, but that is a little optimistic. They may be inserted into cars, so all you have to do is type in the number. The mobiles of the future will probably be totally voice activated so you don't even have to touch the mobile to make a call. Also I think the call quality will be very much better so that it will be like standing right next to the person, finally I think that with the amount of satellites that will be in space, the world will have a 100% reception all the time wherever you are in the world, from Mount Everest to where the Titanic lies. Conclusion In conclusion I would like to say that human communication technology has come a long way in a very short space of time. From 1946 when AT&T bought out a 25x10x8cm, 500g, brick of a mobile to 1999 when Nokia bought out a 5x2x1cm, 86g, suberb bit of technology. And if will continue to invent and proceed in the tense, fast world of technology the way we have in the last 50 years who knows what the future will bring, we can only guess. Evaluation I think that I have done very well in this project because I did a lot of research and I did a lot of thinking to try to come up with original ideas for this project. I have learnt that the mobile phone world is growing very fast and that the business person of today's world needs a mobile to stay in touch with the rest a the business world. ...read more.