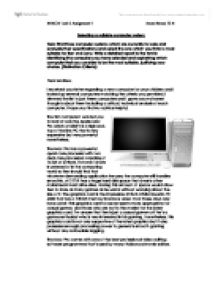 Selecting a suitable computer system Task: Find three computer systems which are currently for sale and evaluate their specifications and select the one which you think is most suitable for Ben and Jerry. Write a detailed report to the family identifying the computers you have selected and explaining which computer that you consider to be the most suitable, justifying your choice. (Distinction Criteria) Dear Andrew, I received your letter regarding a new computer for your children and I looked up several computers matching the criteria you provided. I trimmed the list to just three computers and I gave you my honest thoughts about them including a critical, technical analysis of each computer. I hope you find my advice helpful. The first computer I wanted you to look at was the Apple Mac Pro which at �5691 is a high end, top of the line PC that is very expensive but very powerful nonetheless. The Mac Pro has a powerful quad core processor with two dual core processors capable of 16 GB of SDRAM. To have 16 GBs is unheard of in the computing world so Ben should find that whatever demanding application he uses, the computer still handles smoothly. At 2 TB it has a huge hard disk space that dwarfs other mainstream hard drive sizes. Having this amount of space would allow Ben to store as many games as he wants without worrying about the size of it. ...read more.

The speaker that comes with the package is the Bose Companion 3 Series II which is a multimedia speaker system that is unlike any other conventional speaker in the sense that it delivers crisp sound and stunning ambience that creates a life like atmosphere, be it playing games or watching a HD movie. Also, since the computer has a Blu-Ray disk drive, it has the ability to play games or watch films in true high definition. I'm also impressed with the Dell Ultrasharp widescreen display that completes the High definition capability of the PC. Since the monitor's widescreen, you get the sense that it's almost a widescreen television not a PC monitor. Its operating system Windows Vista is reputed to be a media centric OS so Jerry and Ben would enjoy using its 3D user interface which has an Apple Mac feel. The XPS 430's RAM is well above average too with 8GB. Most computers have 2, maybe 3 GB because that's an acceptable amount. RAM is a good indicator of how good a computer is because it shows how many programmes a machine can run without having to slow down. So the more RAM on store, the more programmes you can run without worrying about it slowing things down. Finally, we mustn't ignore the digital video capture capability in this PC. It has a built in 2.0 mega pixel camera which is capable of taking pictures, record videos and it's perfect when added with VOIP(Voice over Internet Protocol) ...read more.

That leaves me with the Dell XPS 430 which I reckon is the most suitable PC as it satisfies the needs of both Jerry and Ben equally well. Its graphics card is incredibly powerful and the RAM it possesses is enough to handle the most highly detailed games. It even has a blu-ray disc drive to play HD games and its quad core 2 processor is one of the best for gaming. Ben is sure to be impressed with these specifications. Jerry on the other hand will be excited to have Adobe Photoshop and Adobe Premiere which are excellent programmes for image and video editing. The XPS 430 even has deck-top docking area to conveniently dock portable devices like a digital camera. This would without doubt be convenient for Jerry as he can simply plug in his camera and get editing without wasting much time. It has a VGA and HDMI output to connect to the television and watch movies and its sound system gives an incredible atmosphere. Whether it's watching videos or playing games this sound system would simply maximise the viewing experience. One mustn't forget that it also has a 2.0 mega pixel camera that records and takes pictures and is suitable for applications like Skype. The icing on the cake without doubt has to be the fact that it's the cheapest PC from the ones I've listed at �670 and that's why I recommend that you purchase the Dell XPS 430. ?? ?? ?? ?? BTEC IT Unit 2 Assignment 3 Aman Harees 12 B ...read more.