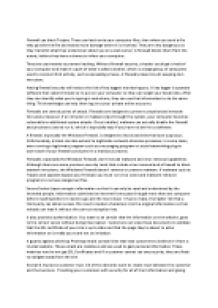 Transfer-Encoding: chunked ﻿Firewall can block Trojans. These can latch onto your computer files, then when you send a file they go with the file and makes more damage where it is received. They are very dangerous as they transmit what they undercover about you on a web server. A firewall blocks them from the outset, before they have a chance to infect your computer. They are used mainly to prevent hacking. Without firewall security, a hacker could get a hold of your computer and make it a part of what?s called a botnet, which is a large group of computers used to conduct illicit activity, such as spreading viruses. A firewall prevents such peeping-tom intrusions. Having firewall security will reduce the risk of key loggers monitoring you. A key logger is spyware software that cybercriminals try to put on your computer so they can target your keystrokes. After they can identify what you're typing in and where, they can use that information to do the same thing. This knowledge can help them log in to your private online accounts. Firewalls are central points of attack. ...read more.

If it expires then a pop up will be shown to customers saying the site is no longer secure which means they are unlikely to continue. Having a strong password is very beneficial and is sure to protect from any malicious activity. If you have a strong password nobody can access your account and gain all your personal information. It also means no malicious software can break the password either, if it contains a mixture of letters, numbers, symbols, capital and lower case letters nothing will be able to break it and steal all your personal information. The main and only disadvantage of having a strong password is forgetting it. If it has lots of symbols and letters it?s hard to actually remember it which means you could be locked out of accounts. It?s also unsuitable at most times to write the password down somewhere to remind you which means that it is easily forgotten. Captcha is a way to differentiate between an automated computer program and a human. It is a box with distorted text that must be translated in order to enter email services, online polls, and to complete online purchases. ...read more.

Some firewall or proxy systems may not allow access to HTTPS sites. Sometimes this is simply because the administrators have forgotten to allow for HTTPS. However sometimes it is a conscious security decision: since HTTPS connections are end-to-end encrypted, they can be used to carry any traffic at all. Allowing them through a firewall, which then has no way to look inside the data stream, could allow any sort of data transfer. Digital certificate is an encryption technology. It does this by using public key and private key information. The digital certificate authenticates the identity of the sender to ensure safer communication and prevent fraud on the Internet. By encrypting communications such as emails, logins or online banking transactions it means that it protects private data and prevent the information from being seen by unwanted people. They are also user friendly, they work automatically and require minimal involvement. It is not 100% effective. In 2011, Dutch digital certificate authority called DigiNotar was compromised by hackers. Since time certificate authorities are in charge of issuing the certificates, hackers target them in order to manipulate information. As a result hackers can create websites of send emails that look real and pass certification tests but are really fraudulent. ...read more.