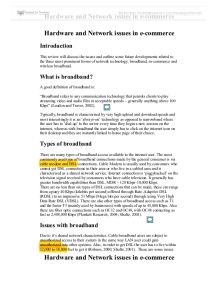 Hardware and Network issues in e-commerce

Hardware and Network issues in e-commerce Introduction This review will discuss the issues and outline some future developments related to the three most prominent forms of network technology, broadband, m-commerce and wireless broadband. What is broadband? A good definition of broadband is: "Broadband refers to any communication technology that permits clients to play streaming video and audio files at acceptable speeds - generally anything above 100 Kbps" (Laudon and Traver, 2002). Typically, broadband is characterised by very high upload and download speeds and most interestingly it is an 'always-on' technology as opposed to narrowband where the user has to 'dial-up' to the server every time they begin a new session on the internet, whereas with broadband the user simply has to click on the internet icon on their desktop and they are instantly linked to home page of their choice. Types of broadband There are many types of broadband access available to the internet user. The most commonly used type of broadband connections made by the general consumer is via cable modem and DSL connections. Cable Modem is usually used by consumers who cannot get DSL connections in their area or who live in a cabled area and is characterised as a shared network service. Internet connection is 'piggybacked' on the television signal received by consumers who have cable television. It generally has greater bandwidth capabilities than DSL. MDR - 128 Kbps-10,000 Kbps. There are no less than six types of DSL connections that can be made, these can range from a puny 40 Kbps (kilobits per second) offered through Rate-Adaptive DSL (RDSL) to an impressive 51 Mbps (Mega bits per second) through using Very High Data Rate DSL (VDSL). There are also other types of broadband access such as T1 and the faster T3 (mainly used by businesses) with speeds of up to 45,000 Kbps. Also there are fiber optic connections such as OC12 and OC48, with OC48 connecting as fast as 2,488,000 Kbps (Plunkett Research, 2004; Shultz, 2001). ...read more.

Sainsbury's, an open architecture is important to allow the passing of information between various devices, for example passing a shopping list from a PDA to PC. Although 802.11 is the current wireless standard, new developments are being made such as 802.11b (for faster connection), which could hinder the concept of an open architecture. It is also important for retailers, as an open architecture will allow them to add their applications, whether it be through their own staff or externalising such processes (Shullman, 2003). Privacy As new mobile phones are being fitted with location detection facilities, so that the user could be easily found in the event of an emergency. This is seen as an opportunity as an application for the m-commerce industry. For example, when in town centre a user could be alerted to an offer being made by a department store which just happens to be round the corner. This could go two ways, the consumer could find this facility very useful or more seriously, they could perceive it as an invasion of privacy. (Dano, 2003; Shullman 2003). Interoperability and user statistics This is particularly problematic for the advertising segment of m-commerce. M-commerce is a good marketing tool. For example, a beer company could distribute promotional coasters with registration codes on them. With these codes, consumers can sign up for trivia games and sweepstakes contests. This would allow the company to promote their brand and collect information such as addresses and phone numbers. "the biggest hurdle is some consistent way to track all this" says Robert Griffin of Media Planning Group. There is no central database of wireless users that would allow the marketers to find out what types of consumer they are reaching. An issue related to interoperability is that of payment. There is no industry-wide mobile payment platform. Currently there is no universal way to pay in m-commerce, so in essence not everything is available to buy in m-commerce, right now the case is that if a consumer is with a certain operator then they can make certain purchases, e.g. ...read more.

The three network technologies discussed above are the most advanced and the most speculated of all the network technologies. In their own right they encapsulate what the internet will become and where it will go. Broadband brings to the avid web surfer exactly what they have been longing for, a fast and an always on connection to the internet. Although businesses have had fast connections to the internet for a long time now, this is a relatively new concept for the general consumer. This in itself should promote 100% uptake of it. However issues such as availability, security and cost issues continue to impede the true level of success that broadband can enjoy. But if these issues are dealt with in time, broadband could herald a new age in internet access such as the implementation of a fiber optic network. M-Commerce has immense potential. In an age where having a mobile phone is seen as more of a cultural accessory than a convenience device, m-commerce is the next logical application to introduce. Again there are a few issues that prevented the explosion of m-commerce that was expected in the late nineties (Dano, 2003). However, as mentioned before, there have already been developments into the two main issues interoperability and security. The applications of m-commerce can be endless ranging from making payments at retail stores to playing video games on them. Although m-commerce has suffered a slow start, in time it will realise it's true potential (Thomas, 2003). Finally regarding wireless broadband. This is the next evolutionary step for broadband. It should surpass wireline broadband in uptake. But issues of cost and availability prevent it from taking off. This could be a serious handicap, even though wireless broadband offers significant advantages over wireline broadband. However this is the newest technology of them all and organisations like Sprint are still remaining optimistic about this technology (Mannion, 2001). ...read more.