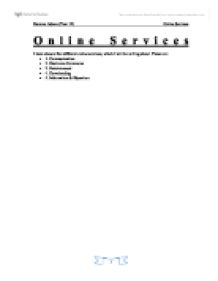 Online Services I have chosen five different online services, which I will be writing about. These are: * 1. Communication * 2. Electronic Commerce * 3. Entertainment * 4. Downloading * 5. Information & Education 1. Communication One of the most used online services is communication. This becomes more and more essential today. There is hardly any internet user, who does not use this service. Communication is a way in which people can have conversations with other users around the globe. They can do this in different ways: Instant Messaging, Email and Voice over Internet Protocol (also known as VoIP). Communication over the internet has a lot of benefits. The main one is that it saves you money, as often the mentioned services are for free. Instant Messaging: This is usually a software such as the Windows Live Messenger, which is provided by MSN. You can download this piece of software for free and use all of its main features without having to pay anything. It also has a voice conversation feature. Email: This is a letter that you send over the internet. This has the advantages that it saves you a lot of time and money as well, as it can be sent within a few seconds to anyone around the globe. Another advantage of this is that you can also attach files or pictures to the email. The most popular Email provider on the Internet is Hotmail, which is also a service of MSN. It has over 260 million users worldwide. VoIP: VoIP is telephoning over the internet to either a telephone or to another person who is using their own pc to make VoIP calls. This is often very price efficient or are even free if the other person uses the internet rather than a telephone. Some softwares also provide telephone calls completely free of charge for certain selected countries. ...read more.

You do not need an account for watching videos. An account on YouTube is completely free. YouTube is the most popular video sharing website on the internet with more than 100 million videos being watched every day. There are millions of YouTube users. Most of them have uploaded their videos on YouTube.com, and they share it with other users worldwide. Advantages of YouTube * You can share videos with any other user across the world that has an account. * You can make new friends by subscribing to them or inviting them to be a friend of yours. * There are a lot of educational video clips available, such as tutorials that teach you how to do certain things you would want to do. The most popular ones are tutorials about software. * It can entertain you for a lot of time as it has billions of video clips. * You can find any type of video clips, including tutorials, comedy videos, movies, and advertisements Disadvantages of YouTube * There is a limit of size for the videos. Users are not allowed to upload any video clips longer than 10 minutes or larger than 100 MB. So if you would want to upload a longer or larger video, you would have to split the video in more parts and upload it then. * Often your videos get deleted with the reason that it breaks the copyright laws, even if you upload your own videos. This is because their computer deletes files automatically as it believes that the video is against the law to be published on YouTube. * If you want to watch a video, it sometimes takes too long until the buffering is finished. Downloading Downloading is the term used to describe receiving data from a remote system, such as the webserver to your own system. On the internet you can download everything, reaching from software, to music and videos. ...read more.

Infection In April 2007, researchers at Google discovered hundreds of thousands of web pages that initiated drive-by downloads. It estimated that one in ten of the 4.5 million pages it analysed were suspect. Sophos researchers reported in 2008 it was finding more than 6,000 newly infected web pages every day, or about one every 14 seconds. Since May, Sinowal has compromised over 100,000 online bank accounts RSA's fraud action team said it noticed a spike in attacks from March through to September this year. That is backed up by another online security company called Fortinet. It said from July 2008 to September 2008 the number of reported attacks rose from 10m to 30m. This included trojans, viruses, malware, phishing and mass mailings. "The explosion in the number of attacks is alarming," said Derek Manky of Fortinet. "But trojans are just one of the players in the game wreaking havoc in cyberspace." Remedies While attacks are on the increase, there are some simple steps that users can take to protect their information besides using security software. "We have a saying here which is 'think before you link,'" said Mr Manky. "That just means observe where you are going on the web. Be wary of clicking on anything in a high traffic site like social networks. "A lot of traffic in the eyes of cyber criminals means these sites are a target because to these people more traffic means more money," he said. The rate at which Sinowal has been compromising online bank accounts RSA also urged users to be wary if their bank started asking for different forms of authentication such as a social security number or other details. "People think not clicking on a pop up or an attachment means they are safe. What people don't realise now is that just visiting a website is good enough to infect them." RSA said it is co-operating with banks and financial institutions the world over to tell them about Sinowal. It has passed information about the virus to law enforcement agencies. ?? ?? ?? ?? Kamran Adnan (Year 12) Online Services ...read more.