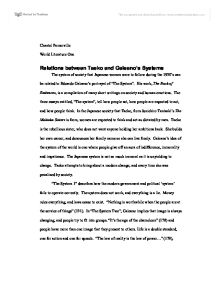 Relations between Taeko and Galeano&amp;#146;s Systems

Chantel Pomerville World Literature One Relations between Taeko and Galeano's Systems The system of society that Japanese women were to follow during the 1930's can be related to Eduardo Galeano's portrayal of "The System". His work, The Book of Embraces, is a compilation of many short writings on society and human emotions. The three essays entitled, "The system", tell how people act, how people are expected to act, and how people think. In the Japanese society that Taeko, from Junichiro Tanizaki's The Makioka Sisters is from, women are expected to think and act as dictated by men. Taeko is the rebellious sister, who does not want anyone holding her ambitions back. She builds her own career, and denounces her family name so she can live freely. Galeano's idea of the system of the world is one where people give off an aura of indifference, immorality and impatience. The Japanese system is not so much immoral as it is unyielding to change. Taeko attempts to bring about a modern change, and every time she was penalized by society. ...read more.

People do not take time to care for others, or complete things the long and fulfilling way. The essay creates an image of a capitalist society, where it is foolish to have a compassionate heart. If one desires to get ahead in life, it is necessary to be ruthless. The Japanese system in not a complete mirror image of Galeano's ideas. The economy can be ruthless, but the culture takes time to respect life. It is set in its old traditions of males earning the wages while women maintain the home, and the traditional family name (Tanazaki 163, 358). Taeko rebels against the standards of her society. She "would do what she wanted regardless of the trouble it might cause and the rumors it might start" (279). Taeko's doll making began as a hobby, then progressed into dress-making (128). Sachiko disapproved of this rebellion against Taeko's position in society; she is a Makioka, not a common tailor. The novel states, "What were Taeko's real motives for setting out to become a working woman?...Married to so worthless a person, she should be prepared to support him [Okubata]... ...read more.

Every time Taeko tries to fight the system, she ends in failure. Her affairs with Okubata, Itakura and Miyoshi all end in death, which is a form of punishment for trying to change the way things are. Her attempt at becoming economically independent from the family by sewing ends with her funding being taken away and her disownment, also due to her supporting Okubata. Galeano's idea of a 'survival of the fittest' system applies to Taeko; she leaves Sachiko and has to fare for herself in the world, ending in pregnancy and bankruptcy. The idea of "...be the screwer or the screwed..." (Galeano 180) and looking out for one's self is also applied to Taeko. She is a selfish hedonist, and "did what she wanted to do regardless..." (279). Taeko is an example of a revolutionary woman of her time, who initiates change in an age-old society, chained down by tradition and standards. 1,053 words Words Cited Galeano, Eduardo. The Book of Embraces. Trans. Cedric Belfrage. New York: W. W. Norton, 1991. Tanizaki, Junichiro. The Makioka Sisters. Trans. Michael R. Katz. New York: Prentice Hall, 1992. ...read more.