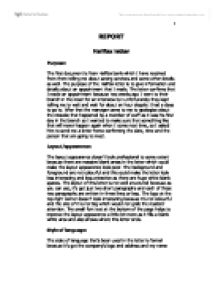 REPORT Halifax letter Purpose: The first document is from Halifax bank which I have received from them telling me about saving services and some other details as well. The purpose of the Halifax letter is to give information and details about an appointment that I made. The letter confirms that I made an appointment because two weeks ago I went to their branch in the moor for an interview but unfortunately they kept telling me to wait and wait for about an hour despite I had a class to go to. After that the manager came to me to apologise about the mistake that happened by a member of staff as it was his first day in the branch so I wanted to make sure that something like that will never happen again when I come next time, so I asked him to send me a letter home confirming the date, time and the person that am going to meet. Layout/appearance: The layout appearance doesn't look professional to some extent because there are massive blank areas in the letter which could make the layout appearance look poor. The background and foreground are not colourful and this could make the letter look less interesting and less attractive as there are huge white blank spaces. The layout of this letter is not well structured because as you can see, it's got just two short paragraphs and each of these two paragraphs are written in three lines or less. The logo at the top right corner doesn't look interesting because it's not colourful and the size of it is not big which would not grab the readers' attention. The small font text at the bottom of the page helps to improve the layout appearance a little bit more as it fills a blank white area and also shows where this letter ends. Style of language: The style of language that's been used in the letter is formal because it's got the company's logo and address and my name and address. ...read more.

like the opening times of Sheffield Teaching Hospital because the audiences will need to know when the building opens and closes so they know when to go. Another bad point is that the flyer doesn't show the building from the inside and this would make it a bit harder for people to find the reception or where to go to when they arrive in their. Improvements that could be made: I think that some improvements could be made in order to make this flyer look more interesting and attractive so it grabs the readers' attention. These improvements are shown below: * Add some more information about opening times and contact details. * Insert a picture of the building from the inside. * Make the last page look more interesting and this can be done by adding a background colour, changing the font style and make it look informal. Suitability: In my opinion I think that the house style of this flyer suits its purpose. The flyer contains some suitable graphics like a map, suitable background colour and text font colour. These features will suit the flyer's purpose as they are attention-grabbing. Hillsborough college letter Purpose: The purpose of this letter is to inform students of what will be happening on a particular day which is Tuesday, September 30th 2008. The letter tells us clearly what its aims and targets. It's telling us that industrial action, in the form of a one day strike, has been notified to the Sheffield College. In the middle of the letter, it tells what its purpose exactly is which could make the readers well informed and makes the letter more understandable. I think that the letter shows its purpose in a very professional way and what I mean by professional is the type of language that's used, enough information and details and everything is broke into well structured paragraphs. ...read more.

The font style of the headings is bald so it stands out. I think that the type of writing suits the house style of the flyer with its colours and font styles. The third flyer I have done is from Hillsborough College. The type of writing of the flyer is informal and simple as there isn't much text because it gives out all its information in short details and it also put the point across first. This flyer is trying to persuade adults to do these tests and inform them briefly of how this can be done. It's persuasive because it uses words like "FREE" and "receive a �15" which could make the readers more attracted. The font style that's been used suits the house style of the flyer. There are lots of ways these flyers could be compared as they are all informative flyers; some text is coloured on each one of them and they all have a big bold title so the title stands out more. The Halifax Bank flyer and the Sheffield teaching hospital flyer have one thing in common as they are both made up of 6 and 8 pages and both are informative but they are both talking about two completely different things Halifax Bank flyer is talking about how to protect personal information and the Sheffield teaching hospital is talking about where their building is at and how to get there. There are also some similarities between these flyers because the Sheffield teaching hospital one and the Hillsborough College one have got pictures which again indicate to me that they trying to make it as attractive as possible for people to have a good look at what they are trying to say. In my opinion I think that the Sheffield teaching hospital flyer is the better than the rest and looks more professional. There are lots of graphics and colours on this flyer which would make it look more attractive and interesting than the other ones. The amount of text included is also suitable and matches its targets. ?? ?? ?? ?? 1 ...read more.