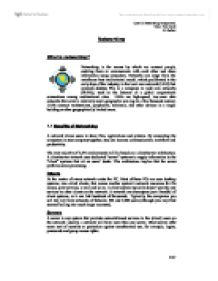 Networking What is networking? Networking is the means by which we connect people, enabling them to communicate with each other and share information using computers. Networks can range from the mainframe host and terminal model, which proliferated in the early days of the industry; to the local area network (LAN) that connects desktop PCs in a company; to wide area networks (WANs), such as the Internet or a global corporation's connections among multinational sites. LANs are high-speed, low-error data networks that cover a relatively small geographic area (up to a few thousand meters). LANs connect workstations, peripherals, terminals, and other devices in a single building or other geographically limited areas. 1.1 Benefits of Networking A network allows users to share files, applications and printers. By connecting the computers in your company together, you can increase communication, workflow and productivity. The vast majority of LAN environments will be based on a client/server architecture. A client/server network uses dedicated "server" systems to supply information to the "client" systems that sit on users' desks. This architecture implies that the server performs some processing. Clients At the centre of every network exists the PC. Most of these PCs are user desktop systems, also called clients, that access another system's network resources for file access, print services, e-mail and so on. A client system typically doesn't provide any services to other clients on the network. A network can encompass just a handful of client systems, or it can link hundreds of thousands. Typically, the companies you sell into will have networks of between 100 and 1,000 users (although you may find yourself selling into much larger accounts). Servers A server is any system that provides network-based services to the (client) users on the network. Usually, a network will have more than one server. Most servers offer some sort of security or protection against unauthorized use, for example, logins, passwords and group access rights. ...read more.

These topologies are logical architectures, but the actual devices need not be physically organized in these configurations. Bus and ring topologies, for example, are commonly structured physically as a star. A bus topology is a linear LAN architecture in which transmissions from network stations propagate the length of the medium and are received by all other stations. Ring Topology A ring topology is a LAN architecture that consists of a series of devices connected to one another by unidirectional transmission links to form a single closed loop, as shown in the figure above. Star Topology A star topology is a LAN architecture in which the endpoints on a network are connected to a common central hub, or switch, by dedicated links. Logical bus and ring topologies are often implemented physically in a star topology. Tree Topology A tree topology is a LAN architecture that is identical to the bus topology, except that branches with multiple nodes are possible in this case. WAN Topology A WAN spans a large physical distance. A WAN like the Internet spans most of the world. A WAN is a geographically dispersed collection of LANs. A network device called a router connects LANs to a WAN & the usual Topology of a WAN is in the form of a Star or Mesh Topology. MAN Topologies A MAN serves a role similar to an ISP, but for corporate users with large LANs. The WAN topology is usually of the Mesh or Ring Topology shown in the Physical Topologies Diagram. 3.1 Network Software The Network Operating system that I am going to install is going to be Windows NT4 Server. Screenshots with corresponding notes are shown below: * This is the Set-up screen and we press Enter to proceed with Windows NT Set-up. * Above we are being asked to partition the disk, after partition the user will be asked size of the hard drive. ...read more.

That person will be liable for any violations of Federal laws, State laws, or University policies. The IT security coordinator and the appropriate authorities should be notified about violations of computer laws and policies, as well as about potential loopholes in the security of any computer systems and networks at Northwestern." (c) The rights & responsibilities of the users at this university are clearly shown (inside of the (c) sign). Most universities have similar user rights & responsibilities with respect to there IT network, which may be at anytime updated and changed by the administrator of the university. Cost of Installation of the Laboratory/Office Network The following text will show the rough evaluation of installation and relevant equipment needed to set-up the Laboratory/Office network. Please note that this is only a rough guide and that prices and quotations may vary according to size of purchase and place of acquisition. Essential Network Hardware * Category 5e Solid Core Cable - 305m box - �40.00 (incl. VAT) * RJ45 Plug (x 20) - �2.50 (incl. VAT) * Network Interface Cards - Dlink PCI Network Card 10/100 Mb OEM - �10.58 * N.O.S - (Windows 2000 Server) for 25 Clients - �849.99 * Desktop Operating System will be Windows 2000 - �499.99 * Application: Microsoft Office 2000 Professional - �194.99 * NetWare 5.1 Server - �699.99 * Internet Access: Internet Bandwidth: 2Mbps: �1'200 Per Month or �10,800 per annum. (http://www.newnet.co.uk/leasedlines/#prices) * Network Maintenance - Depending on the Size & Network Protection Standards etc the approximate cost of maintaining a Network is 80% of the IT budget & can be quite expensive. TOTAL APPROXIMATE COST: � 13'000 - �14'000 per annum. Reference & Bibliography Using The Harvard Referencing System as a guide, these are my points of reference and the textbooks that I used to complete the assignment. Reference List * B.HELLINGSWORTH, P.HALL & H.ANDERSON (2001), Higher National Computing, Newnes. * DOUG LOWE (2001), Networking for Dummies, Hungry Minds Inc * ANDREW TANENBAUM (2002), Computer Networks, Prentice Hall. * SYBEX (2002), Networking Complete, Sybex International. ...read more.