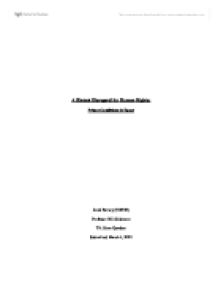 A blatant disregard for human rights: Prison conditions in Egypt.

A Blatant Disregard for Human Rights: Prison Conditions in Egypt Jared Berney (329338) Professor Bill Skidmore TA: Sima Quadeer Submitted: March 4, 2003 A Blatant Disregard for Human Rights: Prison Conditions in Egypt Egypt: a country with a population of over 69 000 000 people, home to some of the worlds most fascinating structures (like the Pyramid's and The Great Sphinx), and a main contributor to a good deal of the world's trade industry (most notably petroleum products and cotton textiles) 1. One would expect such an affluent country to be a nation thriving on high integrity and proper treatment of its citizens. This is anything but the case. In what has been referred to as "appalling", "life-threatening" and a "filthy system", the prison conditions in Egypt and the procedures that accompany it are testament to a true human rights violation and are in dangerous need of improvement. From the moment an accused person is arrested until their last dying breath in prison, Egypt's attention to such an important aspect of the legal system is a dismal display of a governments disregard for the lives of its citizens. Throughout the course of this essay, the main factors that lead to this human rights violation will be explored (i.e. the process of arrest, interrogation, and living conditions). On top of that, possible solutions to the problems will be presented to the reader in an attempt to bring light onto the grim situation that is the prison system in Egypt. This essay is not an attempt to put down the Egyptian government for its total lack of careful treatment to those in prisons; it is intended to open eyes to a problem that appears to get less than enough attention. ...read more.

A more charitable approach should be taken to such a pitiful state of affairs if the legal system feels as though they have any chance of rehabilitating the inmates it's mistreating. If the above conditions seem harsh, what prisoners are forced to experience for the first while of their stay is going to appear even worse. It's called Incommunicado Detention. In a country like Canada, the main moral principle behind prisons is that the public feels that crime is rising and that our society is not as safe as it once was.8 In Egypt, the principle is more based around the idea of punishing the criminals and making them feel worthless for what they've done. Before they arrive at the prison, the arrested person is blindfolded so that they have no idea where they are going and handcuffed from behind so that they cannot fight off any harassment from the authorities. This is done for the sole reason that the authorities feel that the humiliation of this will weaken them, and thusly, make the interrogation process easier. They are than throw into an unventilated, barren room and are rarely given any food. One past inmate remembers that "... one of the most difficult things was being blindfolded and handcuffed the entire time... when you eat, when you wash, when you go to the toilet".9 Once there, the inmates are consistently interrogated for as long as ten straight days. If this doesn't lead to the sort of confession the authorities are looking for, the prisoners are stripped to their underwear and brutally tortured until they confess what they have done (sometimes confessing something they haven't done just so the torture will stop). ...read more.

Accused people are taken to prison in what is the most alarming of fashions. When they are there, they are put through a humiliating series of interrogations. They are placed in the most unsanitary, revolting state of living conditions imaginable. They are beaten. They are harassed. They are even killed (67 men and women lost their lives in 2001 at the hands of the authorities).18 They are deprived of every possible factor that makes being a human so great. What they should be offered is a second chance. What inmates get instead is a drive to hate both themselves and the world around them. Egypt's prison system is not rehabilitating its prisoners into better citizens like it should be by allowing them to learn from their mistakes, it's only digging a further hole for them. It's turning them into even worse visions of what a good citizen should be. All the solutions in the world can be suggested in order to improve this state of affairs, but what it comes down to is the willingness of the Egyptian prison system to change what they believe to be a perfect method of going about this. With such a state-of-mind coming from Egypt, it's unlikely that anything will change for a long time. However, as citizens of a country with a far better prison system, it's important to remember that what seems to be an awful place within our own country is much worse in other countries. All faucets of the Egyptian prison system represent something that could be handled in a much more humanitarian approach. It's with that belief that we, as a separate nation, can hope that one day this will happen; both for the benefit of the inmates who are put through it and the integrity of the country itself. ...read more.