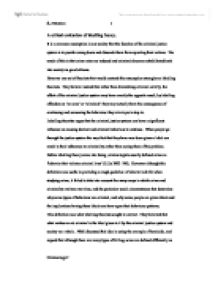 A critical evaluation of labelling theory.

A critical evaluation of labelling theory. It is a common assumption in our society that the function of the criminal justice system is to punish wrong doers and dissuade them from repeating their actions. The result of this is that crime rates are reduced and criminals become rehabilitated back into society as good citizens. However one set of theorists that would contend this assumption strongly are labelling theorists. They believe instead that rather than diminishing criminal activity, the effect of the criminal justice system may have exactly the opposite result, by labelling offenders as 'ex-cons' or 'criminals' they may actually have the consequence of continuing and worsening the behaviour they aim to put a stop to. Labelling theorists argue that the criminal justice system can have a significant influence on causing deviant and criminal behaviour to continue. When people go through the justice system the very fact that they have now been given a label can result in their adherence to criminality, rather than curing them of the problem. Before labelling theory came into being, criminologists usually defined crime as 'behavior that violates criminal laws' (Lilly 2002: 106). However although this definition was useful in providing a rough guideline of what to look for when studying crime, it failed to take into account the many ways in which crime and criminality evolves over time, and the particular social circumstances that determine ...read more.

These stereotypes and false assumptions cause society to treat offenders differently, as if they have poor character (Lilly 2002: 112) or are likely to re-offend at any moment. This behaviour may seem sensible, as it is probably not a good idea to trust convicted thieves with your property, for example, however this type of treatment, according to labelling theorists, may precipitate the formation of the very type of criminal that people were afraid of in the first place. Becker suggests that this prophecy fulfilling process takes place by the negative label, such as 'criminal', 'junkie', 'rapist' becoming the individual's main method of public identification, to the exclusion of all other means. It is the 'master label' and secondary labels, which may even be positive, count for almost nothing. For example if someone is identified as being a 'father', a 'shopkeeper' a 'husband' and a 'murderer' it is perfectly obvious which label sticks in the mind of observers, even though this individual also owns a number of more positive labels they will tend be judged by the one negative 'master' label. (Becker 1963 in Lilly 2002: 112). The result of this labelling is that the individual will feel isolated from society and may turn to further offending as it may be their only option. ...read more.

(Sherman 1992 in Lilly 2002:115). All these critiques and empirical evidence seem to suggest that labelling theory still contains some holes. The mixed batch of results from some of the studies suggest that labelling theory does work in some cases falls short in others. The overall effect of labelling therefore still remains slightly unclear, possibly because researchers have not yet worked out the factors that determine crime levels in relation to state intervention via the criminal justice system. Further research would be invaluable to determine the full effect of other social factors on an individual's susceptibility to labelling, factors such as strength of bond to family and friends, social background and stage in criminal career. Once these have been studied in greater depth and further empirical evidence collected, it may be possible to make more general statements about labelling effects. (Lilly 2002: 115). Labelling theory attempts to deal with the extremely complex process of social reactions, and it appears that with more empirical evidence the effects of labelling could be better understood. There are certainly many other social factors that may be influential which labelling theory fails to take fully into account, and these may be very important in predicting which individuals will fall into criminal careers. It is likely that the criminal justice system and societal reaction do play a role in influencing this, however there are many other outside influences that also need to be taken into account when assessing this social phenomenon. ...read more.