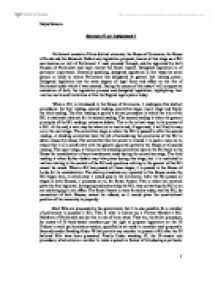 Becoming an Act of Parliament.

Sources of Law-Assignment 1 Parliament consists of three distinct elements; the House of Commons, the House of Lords and the Monarch. Before any legislative proposal, known at that stage as a Bill can become an Act of Parliament it must proceed through, and be approved by both Houses of Parliament and must receive the Royal Assent. Delegated legislation is of particular importance. Generally speaking, delegated legislation is law made by some person or body to whom Parliament has delegated its general law making power. Delegated legislation has the same degree of legal force and effect as the Act of Parliament under which it was enacted. During the course of this essay I will compose an evaluation of both, the legislative process and delegated legislation, highlighting their relative merits and limitations within the English legal system today. When a Bill is introduced to the House of Commons, it undergoes five distinct procedures: the first reading, second reading, committee stage, report stage and finally the third reading. The first reading is purely a formal procedure in which the title of the Bill is read and a date set for its second reading. ...read more.

Perhaps, they feel their retaining good English values and morals that once existed. One thing is for sure, democracy has never prevailed in the House, so how can they possibly be speaking on behalf on the nation? In 1975, in response to the criticisms of the language and style of legislation, arose the Renton Committee, comprised from the judiciary to the lay public examined the obscurity of language, over-elaboration of provisions, logicality of structure and confusion arising from the amendment of existing provisions. In short, it was unanimous that archaic language was very much prevalent and all criticisms were to certain extents justified. It may be argued legislation is heavily debated, by those whom we have duly elected. Scrutiny is a key issue in this debate, and the processes of legislation are by no means hastily carried forward. Much time is devoted by our M.Ps in the House of Commons, and by the Lords, as each aspect is carefully debated and discussed sometimes even challenged. In conclusion, there lies within both forms of legislation, much room for rectification. Rectification we hope to see sooner rather than later. 1 This does not apply in EU Statutory Instruments. 2 The Statutory Instruments Act 1946 3 2000 4 Crime and Disorder Act 1998 5 1932 Majad Saleem 1 ...read more.