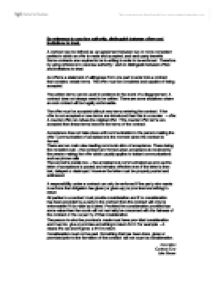 By reference to case law authority, distinguish between offers and invitations to treat. A contract can be defined as an agreement between two or more competent parties in which an offer is made and accepted, and each party benefits. Some contracts are required to be in writing in order to be enforced. Therefore by using reference to case law authority I wish to distinguish between offers and invitations to treat. An offer is a statement of willingness from one part to enter into a contract that contains certain terms. The offer must be completed and capable of being accepted. The written terms can be used in evidence in the event of a disagreement. A contract does not always need to be written. There are some situations where an oral contract will be legally enforceable. The offer must be accepted without new terms entering the contract. If the offer is not accepted or new terms are introduced then this is a counter - offer. A counter offer can refuse the original offer. If the counter offer terms are accepted then these terms become the terms of the contract. Acceptance does not take place until communication to the person making the offer. Communication of acceptance is the moment when the contract is formed. There are two main rules leading communication of acceptance. These being the reception rule - the contract are formed when acceptance is received by the person making the offer which usually applies to instant communications such as phone calls. ...read more.

In the earlier case of Storer v Manchester city council [1979] 1 WLR 294 the plaintiff had received a reply to his formal application to purchase. The reply was a letter from the town clerk forwarding a formal agreement for sale for the tenant to sign, and stating on receipt of that agreement that town clerk would send a copy of it, signed on behalf of the council in exchanged. It contained all the essential terms for the sale of the house. It was signed by the tenant and sent to the council but they failed to sign it and return their copy In exchange. It was held that there was a binding contract. The clerk's letter forwarding the formal "agreement for sale" was a clear offer, containing all the essential terms and the tenant had accepted this offer by signing the agreement and sending it. Therefore an offer is a statement which objectively indicates that the offeror is prepared to contract on specified terms An offer may be revoked or terminated if a reasonable period of time has elapsed - to avoid uncertainty as to what might constitute a 'reasonable period of time' time limits should be specified on any offers made or the offer is withdrawn or revoked at any time prior to acceptance provided that such withdrawal or revocation has been communicated to the person or persons to whom the offer was originally made or the person to whom the offer was made rejects the offer. ...read more.

The Court of Appeal rejected this argument. The defendant's advert did amount to an offer to the whole world but it only matured into a contract when someone performed the condition required in the offer. Consequently, although the offer was made to the whole world, the contact is made with that limited section of the public who come forward and perform the condition requested. The plaintiff who had performed the condition by accepting the offer and providing the necessary consideration could enforce the unilateral contract constituted by the advert and won her case and the �100 claimed. The principle from carllil also applies to advertisements offering rewards. There are traditionally treat as offers rather than invitations to treat. Since there is an intention for the offeror to be bound as soon as the information is given. The distinction between an offer and invitation to treat is often hard to draw as it depends on the elusive criteria of intention. But there are certain stereotyped situations that the distinction is determined by rules of law. An offer is made when a person shoes a willingness to enter into a legally binding contract. An invitation to treat is a supply of information to tempt a person into making an offer. However the distinction between the two can be misleading and misinterpreted. When misinterpretations and complications happen then it is down to the courts to decide and to distinguish between the two terms so a person is not led into a binding contract of which he does not want to be apart of. ...read more.