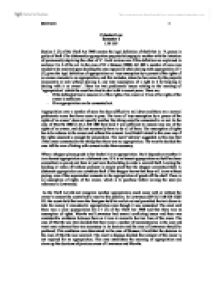 Criminal Law Semester 2 LW 107 Section 1 (1) of the Theft Act 1968 creates the legal definition of theft that is: 'A person is guilty of theft if he dishonestly appropriates property belonging to another with the intention of permanently depriving the other of it'. Each various area f this definition are explained in sections 2 to 6 of the act. In the case of R v Gomez [1993] AC 442 a number of areas was needed to be resolved upon deciding the case especially when dealing with appropriation. S 3 (1) gives the legal definition of appropriation as: 'any assumption by a person of the rights of an owner amounts to an appropriation, and this includes, where he has come by the property (innocently or not) without stealing it, any later assumption of a right to it by keeping or dealing with it as owner'. There are two problematic issues relating to the meaning of 'appropriation' which the court has tried to deal with in recent years. ...read more.

But it depends on weather it is an honest appropriation or a dishonest one. If it is an honest appropriation no theft has been committed, as you do not have to just leave the building in order o commit theft. Leaving the building or make off without payment is simply proof that the shopper committed theft. A dishonest appropriation can constitute theft if the shopper knows that they will leave without paying, even if the supermarket consents to the appropriation of goods off the shelf. There is an assumption of rights of the owner, which is to purchase before leaving the store (in reference to Lawrence) As the Theft Act did not recognize weather appropriation could occur with or without the owner's consent the courts had to resolve this problem. In Lawrence [1971] 2 All ER 1253 HL the courts held that even the foreigner held his wallet out and permitted the taxi driver to take his money it amounted to appropriation even though it was consented. The court said there was a clear appropriation by s 3 (1) ...read more.

The case of R v Hinks (2000) reinforced he position in Gomez hat appropriation was a neutral word within the meaning of theft act and even the acquisition of good title or legitimate ownership, was capable to amounting to appropriation. The court also said there can be theft of a gift if the recipient is dishonest. S 3(2) of the Theft Act provides for appropriation where the original possession of property was innocent. Although if the original possession of the goods was not innocent, later assumption of the same goods would not be theft according to R v Atakpu [1993]. In this case the defendant hired cars with false documents, which amounted to an appropriation. In conclusion the law in this area is no that satisfied. The cases of Morris and Gomez have widened the spectrum. The result in Gomez may have conflicted with civil law. As in Hinks the court held the recipient of a valid gift might be said to have appropriated the gift. Most of the elements under s15 of the theft Act are identical to theft. The difference is deception is needed in an s 15 offences. Since Gomez almost all cases of obtaining goods by deception will also be thefts. 80127410 1 ...read more.