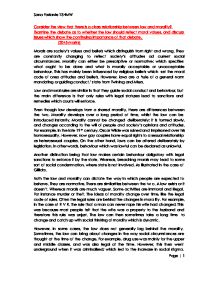 Examine the debate as to whether the law should reflect moral values, and discuss issues which show the continuing importance of that debate.

Consider the view that there is a close relationship between law and morality? Examine the debate as to whether the law should reflect moral values, and discuss issues which show the continuing importance of that debate. (30+5 marks) Morals are society's values and beliefs which distinguish from right and wrong. They are constantly changing to reflect society's attitudes ad current social circumstances. Morality can either be prescriptive or normative; which specifies what ought to be done and what is morally acceptable or unacceptable behaviour. This has mainly been influenced by religious beliefs which set the moral code of ones attitudes and beliefs. However, laws are a 'rule of a general norm mandating or guiding conduct,' state from Twining and Miers. Law and moral rules are similar in that they guide social conduct and behaviour, but the main difference is that only rules with legal statuses lead to sanctions and remedies which courts will enforce. Even though law develops from a shared morality, there are differences between the two. Morality develops over a long period of time, whilst the law can be introduced instantly. Morality cannot be changed deliberately; it is formed slowly, and changes according to the will of people and society's opinions and attitudes. For example, in the late 19th century, Oscar Wilde was ruined and imprisoned over his homosexuality. ...read more.

However, they withdrew feeding a patient who was in a vegetative state as per the case of Airedale NHS Trust V Bland. Another example being adultery. This is not illegal in the UK, but is morally unacceptable within society. However, the main problem being that what does immoral conclude to? The case of Gillicks illustrates that there can be opposing views to morality, i.e., preventing unwanted pregnancies and on the other hand condemning underage sexual activity. Salmonds model illustrates the overlap between law and morals. This means that there are some parts of law which are unrelated to moral rules. For example, road traffic, speed cameras etc. these prevent illegal happenings but are not immoral. The aim is to increase the road safety awareness. Similarly, adultery is not illegal but is immoral within society. This is because there are differing opinions on what is morally right. The Natural Law theory is whether law and morality should reflect each other exactly. However, Natural law theorists feel that law should reflect morality. They believe that much of it is based on religious order, and that there is some kind of higher law that sets out the basic moral code. Supporters of natural law would say that legal rules which did not relate with moral views should be ignored. ...read more.

Devlin felt that the law should support those moral principles. The judges have a residual right to protect and preserve some sort of common morality. This was illustrated in the case of Shaw V DPP. Here the House of Lords invented the crime of conspiracy to corrupt public morality to cover the situation. In the case of Brown and others, the judges were imposing a certain standard of what was called as acceptable behaviour. However, the case of R V Wilson states that the courts have stated that it was entirely a private matter and therefore the law should not intervene. Professor Hart developed more on Mills theory of causing harm to others principle. Here the law will have to intervene in this matter, not because it is wrong, but because the conduct is harmful. Professor Hart focuses on the whole of society. Some individuals would want to be protected by the law, which opposes Harts view of the law having no right to intervene in private morality. The criticism for Professor Hart's view is that the issue of harm arises, but not clearly defined, yet the law still depends on it. To conclude with, since the Hart V Devlin debate, many discussions and cases along with the court have supported Lord Devlin's view. However, the recent event of the Human Rights Act 1998. Suggest that there may be a slow move towards a liberal view. ?? ?? ?? ?? Sana Fazlanie 13HMW Page | 1 ...read more.