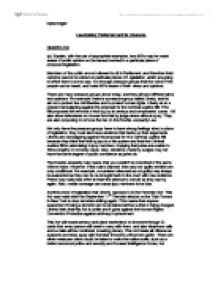 Explain, with the use of appropriate examples, how MPs may be made aware of public opinion on the issues involved in a particular piece of proposed legislation.

Law-Making: Parliament and its Influences Question one (a) Explain, with the use of appropriate examples, how MPs may be made aware of public opinion on the issues involved in a particular piece of proposed legislation. Members of the public are not allowed to sit in Parliament, and therefore their opinions cannot be voiced on particular pieces of legislation, which are going to affect them in some way. It is through pressure groups that the voice of the people can be heard, and make MPs aware of their views and opinions. There are many pressure groups about today, and they all have different aims and opinions. For example, there is a pressure group called Liberty, and its aim is to protect the civil liberties and to protect human rights. Liberty at are present campaigning against the proposal for the Criminal Justice Bill. This Bill proposes the removal of trial by jury in serious and complicated cases. It ill also allow defendants to choose fore trial by judge alone without a jury. They are also proposing to remove the bar on the Double Jeopardy Law. ...read more.

This means that anyone suspected of being a terrorist can be detained without a trial or being charged. Liberty feels that this Act is unfair and it goes against the Human Rights Convention Protection against arbitrary imprisonment. This Act will invade privacy and place restrictions on innocent through ID cards that every person will need to carry with them, and also telephone calls and e-mails will be monitored, invading privacy. This Act treats all citizens as suspects and does away with the idea 'innocent until proven guilty'. There are other measures which could be taken to make the nation safer, such as a better resourced police and security and focused intelligence forces, but instead the government impose an unjustified law which takes away the idea of freedom. To get their views and opinions heard, Liberty runs many events and courses throughout the year, raging from their Annual General Meeting and Annual Conference to their expert legal training courses to the Human Rights Awards. Liberty also has their own council which debate issues that need to be addressed. ...read more.

The Bill is introduced into the House of Lords by a minister in the First Reading. The purpose of the Bill is the explained in the Second Reading. In the Committee Stage, usually the whole house examines the Bill together, and any Lord interested in the Bill can contribute. The Lords go through the Bill in detail, and can either agree to the Bill or change it. In the Report Stage, held about two weeks later, the Lords are given another chance to look over the Bill again, and make amendments to it. The Bill is then examined again in the Third Reading, and any changes can be made to it if necessary. This is the last stage of the Bill before it goes to the Queen for the Royal Assent. In the Royal Assent, the Queen usually signs a letters patent which allows the speaker of the two houses to announce that the Queen has given her assent. Once a Bill has received a Royal Assent, it can become an Act or Parliament, although it usually takes several months to complete all stages of Parliament. Katie Knight ...read more.