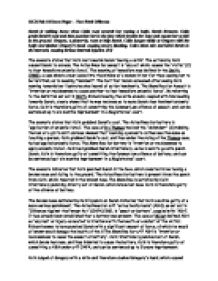 OCR Feb 10 Exam Paper - Non-Fatal Offences Sarah is walking home when Colin runs towards her waving a knife. Sarah Screams. Colin grabs Sarah's coat and then punches her in the face which breaks her nose and causes her to fall to the ground. Gregory, a passer-by, runs to help Sarah. Colin lunges wildly at Gregory with the knife and slashes Gregory's hand, causing severe bleeding. Colin takes aim and kicks Sarah in the stomach, causing serious internal injuries. [35] The scenario states that Colin ran towards Sarah "waving a knife". The actions by Colin caused Sarah to scream. The Actus Reus for assault is 'any act which causes the 'victim' (V) to fear immediate unlawful force'. The meaning of immediate was defined in the Smith (1983), a case where a man looked into the window of a women in her flat thus causing her to be terrified, as to meaning "imminent". The fact that Sarah screamed after seeing Colin running towards her illustrates she feared of action imminently. ...read more.

The scenario indicates that Colin punched Sarah in the face, which resulted in her having a broken nose and falling to the ground. The Actus Reus for battery is present from the punch from Colin, which resulted in the broken nose. The Mens Rea is satisfied by Colin intentionally punching directly out at Sarah, which broke her nose. Colin is therefore guilty of the offence of battery. The broken nose suffered by Colin's punch on Sarah indicates that Colin could be guilty of a more serious punishment. The Actus Reus for s.47 'actual bodily harm' (ABH), as set out in 'Offences Against the Person Act' (OAPA) 1861, is 'assult or battery', coupled with 'ABH'. It has already been established that a battery was present. The case of Miller defined ABH as 'any hurt or injury calculated to interfere with the health or comfort of the victim'. Richard seems to have punched Sarah with a significant amount of force, of which he would of known would damage the health of the V.The Mens Rea for s.47 ABH is 'intention or recklessness to cause the assault or battery'. ...read more.