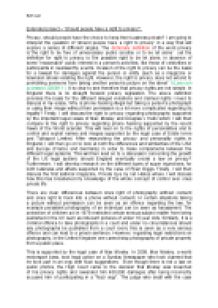 ﻿Beth Lair Extended project ? ?Should people have a right to privacy?? Privacy, should people have the choice to keep their business private? I am going to interpret the question of ?should people have a right to privacy? in a way that will explore a series of different angles. The dictionary definition of the word privacy is ?the right to be free of unnecessary public scrutiny or to be let alone? yet the definition for right to privacy is ?the possible right to be let alone, in absence of some "reasonable" public interest in a person's activities, like those of celebrities or participants in newsworthy events. Invasion of the right to privacy can be the basis for a lawsuit for damages against the person or entity (such as a magazine or television show) violating the right. However, the right to privacy does not extend to prohibiting someone from taking another person's picture on the street? 1(Law.com accessed 20/09/11 ) It is clear to see therefore that privacy rights are not simple. In England there is no straight forward privacy legislation. The above definition provides the basis for the different alleged violations and claimed rights I need to discuss in my essay. Why is phone hacking illegal but taking a person?s photograph or using their image without their permission is a lot more complicated regarding its legality? Firstly, I will discuss the right to privacy regarding photography supported by the important legal cases of Max Mosley and Douglas v Hello which I will then compare to the right to privacy regarding phone hacking supported by the recent News of the World scandal. This will lead on to the rights of personalities and to control and exploit names and images supported by the legal case of Eddie Irvine and Talksport Limited. After researching the privacy and personality rights in England, I will then go on to look at both the differences and similarities of the USA and Europe (France and Germany) ...read more.

Halpern, 2003). More than 30 states in America have some type of image or publicity right including common law or statutes. In certain states, the right ends on death; in California the right follows the term of copyright; and in Tennessee the right is everlasting. Because the Right of Publicity is governed by state (as in opposition to Federal) law, the amount of acknowledgment of the Right of Publicity differs considerably from one state to the next. For example, Indiana is thought to have the most extensive Right of Publicity statutes worldwide, supplying acknowledgment of the right for a hundred years after death and furthermore, guarding not only ones name, image and likeness but also signatures, photographs, gestures, movements, distinctive appearances, and mannerisms. Similarly, the UK?s legal system falls short compared to most other countries in the EU as almost all of them have some right protecting commercial use of an individual's name and image. The countries which have particularly strict personality right laws are France and Germany. In France, image rights were notably developed by judges during the 20th century, until they were formally combined into Code Civil by the enactment of European Court of Human Rights Article 8 as CC article 9 (www.franco-british-law.org/pages/FR/.../assets/.../Image_Rights.pdf)bibliography. In Germany, image and publicity rights have lately been prolonged even after death when Marlene Dietrich?s estate a business from marketing and selling perfumes under the Marlene Dietrich name where ?the courts confirmed that Marlene Dietrich's name and image rights had survived her death and commented that such rights would exist for as long as the person in question remained well-known? 15(Rudnick Gray Cary, 2005) The problems become clear however, when we can see that in the US, it is evident that name and image rights are property rights which can be bought, sold and licensed within an individual's lifetime and sometimes after death but in Europe the rights are extremely closely connected to rights of personal privacy so it is not evident whether such rights can ever be completely transferred. ...read more.

At the beginning of this project, before I had conducted any research, I had a very biased vie, believing that people had a right to privacy in every situation, as the actions they partake in are their own business. However, I can now understand that privacy goes far deeper than a simple yes or no to whether an individual should have the right to privacy. I discovered that there are different rules for different situations. For example, privacy and photography as in some cases the claimants win their right to privacy such as the Douglas v Hello! Case whereas in the Max Mosley case he only won to a certain extent as there was no violation of article 8. On the other hand, photography regarding rights to personalities has different regulations as rights fail to exist in England. This questions how far England is behind other countries such as the USA regarding privacy rights, as they have image and personality rights in over 30 states. Should England follow in the direction of the growth of the US legal system or is it fine as it is? Personally, after reviewing my research I believe that the United Kingdom could benefit greatly from creating certain rights regarding privacy as legal cases would be much easier to finalise the end result. Phone hacking, however, seems to be illegal in both the USA and the United Kingdom as it violates the Regulation of Investigatory Powers Act which after researching, I agree with entirely as it can be very dangerous and cruel such as the Millie Dowler case which proved that phone hacking can have severe and morally unacceptable consequences. Therefore, although certain aspects of privacy such as phone hacking is entirely illegal, distinguishing an individual?s right to privacy is very complicated as there is not a privacy law which entitles a person to privacy. Instead, each situation has a separate rule and regulation and some have none at all. This leads me to conclude that the legal system is too complicated to make a definite decision as to whether an individual is entitled to privacy or not. ...read more.