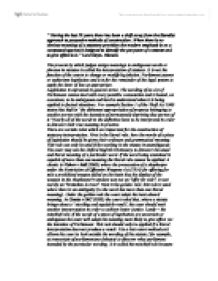 " During the last 30 years there has been a shift away from the literalist approach to purposive methods of construction. When there is no obvious meaning of a statutory provision the modern emphasis is on a contextual approach designed to identify the purposes of a statute and to give effect to it." Lord Steyn. Discuss. The process by which judges assign meanings to ambiguous words or phrases in statutes is called the interpretation of statutes. It is not the function of the courts to change or modify legislation. Parliament passes or authorises legislation and it is for the remainder of the legal system to apply the letter of law as appropriate. Legislation is expressed in general terms. The wording of an Act of Parliament cannot deal with every possible connotation and is bound, on occasions, to be ambiguous and hard to understand when it is being applied to factual situations. For example Section 1 of the Theft Act 1968 states that theft is ' the dishonest appropriation of property belonging to another person with the intention of permanently depriving that person of it.' ...read more.

to discover what parliament intended by the particular wording. It is called the mischief rule because it is supposed to take into account the mischief which the statute intended to remedy. For example in Corkery v Carpenter (1951) a bicycle was held to be a " carriage" for the purposes of the Licensing Act 1872 which provided that a person who was drunk while in charge of a carriage on the highway might be arrested without a warrant. Then moving on further to the approaches, there are types- the common law approach and the civil law approach. The common law refers to the literal approach. Where as the civil law approach refers to the purposive approach. In particular too much use has been made in the past of the literal rule at the expense of a more purposive approach. The three so-called rules- literal, golden and mischief are not rules at all, since there is no compulsion to apply them. More over there is no consistency of application when they are applied. There is no set order of priority. In one case the court will apply the literal rule and in another it will apply the mischief rule. ...read more.

The House of Lords held that, in the circumstances, it was permissible to give a purposive construction to the regulations so as to make them comply with European Community Law. In order to achieve the manifest purpose of the regulations, and to give effect to the clear but inadequately expressed intention of Parliament, it was decided that certain words must be read into the regulations by necessary implication- even though that entailed departing from the strict , literal application of the words which Parliament had chosen to use. It was accordingly held, that a female employee, employed on work of equal value to the work of a male employee doing a different job for the same employer, was entitled, under the Equal Pay Act 1970, to claim equal pay with that man not withstanding the fact that there was another made employee doing the same work as her for the same pay. Therefore in conclusion the real distinction lies in the balance to be struck, in a particular case between the literal meaning of the words on one hand and the context and purpose of the measure in which they appear on the other. Frequently there was no opposition between the two, and then no difficulty would arise. ...read more.