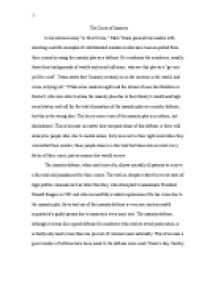 The insanity defense, when used correctly, allows mentally ill patients to receive a fair trial and punishment for their crimes.

﻿The Crime of Insanity In his satirical essay ?A New Crime,? Mark Twain presents his readers with shocking real-life examples of cold-blooded murderers who have been acquitted from their crimes by using the insanity plea as a defense. He condemns the murderers, usually those from backgrounds of wealth and social influence, who see this plea as a ?get out jail free card?. Twain states that ?Insanity certainly is on the increase in the world, and crime is dying out.? While some readers might read the stories of men like Baldwin or Hackett, who were able to abuse the insanity plea due to their family?s wealth and high social status, and call for the total elimination of the insanity plea as a murder defense, but this is the wrong idea. ...read more.

The insanity defense, although it seems like a good defense for murderers who wish to avoid prosecution, is actually only used in less than one percent of criminal cases nationally. This is because a great number of reforms have been made to the defense since mark Twain?s day, thereby making sure that true murderers such as Baldwin and Hackett could not use it to escape jail time or even capital punishment. One test that is now used to determine legal insanity in criminal cases, which was not around during Twain?s time, is the M?Naghten test. This test sates that: "Every man is to be presumed to be sane, and ... that to establish a defense on the ground of insanity, it must be clearly proved that, at the time of the committing of the act, the party accused was laboring under such ...read more.

These days, it would be nearly impossible for wealthy, influential murderers such as Baldwin or Hackett to even plead insanity in court, much less to be acquitted by it. Thanks to these reforms the insanity plea, now more than ever, can be used the way it was intended to be used since the days of the Roman Empire- to protect those whose mental illness makes it impossible for them to be held responsible for their actions. Even though there will always be gray spots in the insanity defense, just as there is in any legal doctrine, the truth is that for as long as there is crime and criminal trials, there will be people working to reform and refine aspects of the judicial system so that everyone who stands trial can receive proper punishment for their crimes. ...read more.