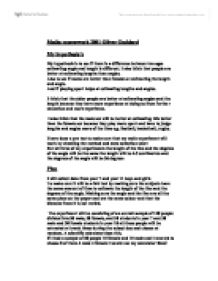 My hypothesis is to see if there is a difference between two ages estimating angle and length is different. I also think that people are better at estimating lengths than angles.

My hypothesis is to see if there is a difference between two ages estimating angle and length is different. I also think that people are better at estimating lengths than angles.

Also to see if males are better than females at estimating the length and angle.

And if playing sport helps at estimating lengths and angles.

I think that the older people are better at estimating angles and the length because they have more experience at doing so from further education and more experience.

I also think that the male sex will be better at estimating this better than the female sex because they play more sport and have to judge lengths and angles more of the time e.g. football, basketball, rugby.

To make sure it will be a fair test by making sure the subjects have the same amount of time to estimate the length of the line and the degrees of the angle.

The median is close to the actual angle

Most females are closer than the males to 4.5 cm plus one female estimated the angle to be 4.5 which was correct

Huge range no males got the angle right

Median 5 very close to the original angle of 4.5 cm

Males are better at estimating lent as the box and whisker graphs prove though the males have a very big range most of the males have been close to the 4.5 cm chosen

The players and non-players have been chosen at random from a group of 60 people.

Here are the results:

I could improve my sample by having a wider range of subjects to chose from and also have a bigger sample.

You can see that the non-players have

Most of the non players have there angle marked between

I think that the older people are better at estimating angles and the length because they have more experience at doing so from further education and more experience.

For this experiment I am using excel again as it it’s a time saving device and also Is a excellent calculator at fast speed if you know the formula to put in for this experiment and all of these experiments I have used the =SUM formula the most. Year 10s chosen underlined in red:

I could of hade made my sample bigger but that would had of taken more time and also a sample of 30 is easier to work with.

The year 7s are closer to the angle