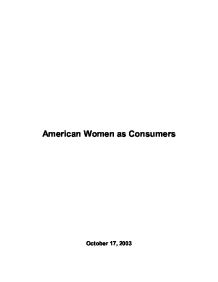 American Women as Consumers October 17, 2003 Introduction Women are marketers' most powerful consumers. They make up nearly 52 percent of the U.S. population and account for influencing or purchasing 85 percent of all of America's products and services (Quinlan, 2003). Their purchasing dominance on the market will only increase with their future rising wealth, education, independence, and longevity. Women have driven the obvious categories of food, beauty, and household products for decades. Today, they make 80 percent of all health care choices, purchase 65 percent of all new cars, and represent half of the traveling population (Quinlan, 2003). The following will discuss and prove why marketers have been and continue to focus on the female consumer. Stated first will be demographics of female American consumers, leading into why they buy and how marketers should market to them. Factors involved with marketing to women that will be elaborated on are stress, beauty, and health. Women have traditionally been the main consumers of cosmetic products such as hair coloring, while men have been the main users of products such as tools and home repair items. However, today, s*x roles are blurred, and gender is no longer an accurate way to distinguish consumers in some product categories (Schiffman and Kanuk, 2004). Advertising to women has also changed in the past decades and will be discussed in the following. Technology is also something that is increasing in interest of the female consumer and will be elaborated on. Finally, the female teenager will be analyzed and discussed stating facts and reasons why they are such an important segment of our nation. Demographics of American Women Today's female consumers are the smartest and most accomplished they have ever been. Most women believe that their state of living is better than their parents and that their children's state of living will be better than their own (New Strategist Editors, 2000). ...read more.

Women make a lot of farfetched promises to themselves to get in shape and take care of their bodies. They tend to link their diet plans to their lives, such as, "I'll get back in shape when I get through the divorce, get back from vacation, etc.", rather than to specific pledges such as, "I'll lose ten pounds in the next three months". Smart marketers in the nutrition and weight-loss categories recognize the running start that women want or need to make plans to get healthier. Food and diet marketers could also help a woman achieve her body goals if they think like she thinks. She needs motivation to jump-start her health plan and then be allowed to take things one step at a time rather than having to begin and go through a continually strict plan (Quinlan, 2003). To maintain good health, 49 percent of women say they exercise regularly, 54 percent get enough sleep, and 86 percent eat vegetables (Editors of Marketing to Women, 2001). For many women, feeling beautiful goes hand-in-hand with feeling confident. This carries over to being confident in the workplace, having respect from other women, and appealing to men. However, truly regaining unlined faces and tight bodies is a tougher and more expensive challenge (Quinlan, 2003). Women are not only significant consumers of nutrition related health products; they are also the dominant healthcare consumers. They account for purchasing almost six in ten prescriptions and make up two thirds of all consumer dollars spent on healthcare. Women place a greater emphasis on prescription benefits than men do when selecting health care. Eight in ten women say that being healthy is their number-one concern (Editors of Marketing to Women, 2001). Fifty-nine percent say cost is not an object when it comes to their health (Editors of New Strategist Publications, 2003). Almost two thirds of women say that not enough attention is being focused on women's health issues by the government. ...read more.

Using celebrities to promote products has been particularly effective among teen girls, specifically in the cosmetics industry (Facenda, 2003). Maybelline uses Sarah Michelle Gellar, Revlon has Halle Berry, Faith Hill and Queen Latifah promote Cover Girl, and L'Oreal enjoins Beyonce Knowles among many other celebrities in their campaigns. Female teen customers say that they are more likely to buy from a company who has actresses and other celebrities using their products (Facenda, 2003). Teenagers are searching for who they are and what they want out of their futures. Actresses, Musicians, and Models are role models that female teens want to look, act, and feel like. Conclusion Making up half of the U.S. population and influencing or purchasing 85 percent of all products and services, it can be concluded that women have become the most power consumers in the United States. Learning the right tactics and tools for marketing to women will only make businesses and corporations more successful. Advertising and marketing to women is no longer limited to certain industries. Today, the female population consumes products in every industry from automobiles to lipstick and skin care products to household repair tools. These changes and growths within the female population are reflected in advertising. Today, consumers can see men and women in there traditional roles, as well as reverse roles. Men are starting to become stay-home parents more, while women are becoming the breadwinners. Many of these changes are due to the rise of women in the corporate world and dual income households. Not only are women an enormous target market, teenage girls are also increasingly becoming a major focus of marketers in the clothing, cosmetics, and home decorating industries. Teenagers today have more money of their own to spend than any other generation before them. Whether middle age or teenaged, married or single, women drive well over half of consumer's purchasing decisions. Marketers that have learned how to successfully listen to the needs and wants of the female consumer, and apply their marketing respectively, should have no problem keeping their businesses and corporations successful. ...read more.