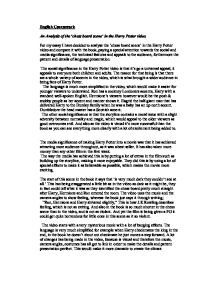 An Analysis of the 'chess board scene' in the Harry Potter video.

English Coursework An Analysis of the 'chess board scene' in the Harry Potter video. For my essay I have decided to analyse the 'chess board scene' in the Harry Potter video and compare it with the book, paying a special attention towards the social and media significance, the technical features and appeals to the audience, furthermore the pattern and details of language presentation. The social significance in the Harry Potter video is that it's go a universal appeal, it appeals to everyone both children and adults. The reason for that being is that there are a whole variety of accents in the video, which is what brought a wider audience in being fans of Harry Potter. The language is much more simplified in the video, which would make it easier for younger viewers to understand. Ron has a cockney Londoners accents, Harry with a standard well-spoken English. Hermione's viewers however would be the posh & snobby people as her accent and manner shows it. Hagrid the half-giant man that has delivered Harry to the Dursley family when he was a baby has an up-north accent. ...read more.

The video starts with a very mysterious music with a lot of banging effects. The language is very much simplified for example when Harry checkmates the king in the end, in the book he doesn't shout out checkmate he just moves a step forward. A lot of changes has being made in the video, because is visual and therefore the music, camera angles, costumes has all got to link in order to make the details and pattern presentation perfect. This would make it more dramatic to create the climax For example the costume is very casual in this scene Harry is wearing a red t-shirt and jeans Ron the same jeans and t-shirt, and Hermione with a little skirt with a simple top. The red t-shirt Harry is wearing for example symbolises war and blood. However when the chessboard is first seen the music gets louder in a sort of crescendo with a battle vibe background, the music increases it's loudness to create a sense of excitement, and at the same time it gets brighter. The set of swords that stop them leaving the room as the walk on to get across the room symbolises war, but this little scene doesn't get mentioned in the book. ...read more.

The reason for that is the music makes it sound more dramatic with its sound effects in way that would be impossible for a book to offer. The lighting at that point changes into a more subtle clear light, aiming specially towards Ron to show what he's expression are like. And as he orders the Night to make he's move in the book it says 'she struck Ron hard around the head her stone in the head and he crashed to the floor.' However in the video the queen doesn't struck Ron on the head but he does crash on the floor. There is a slight similarity between the book and the video, but with a lot of changes made such as not saying the exact words in the book, but simplifying the language a whole lot more. Furthermore as there is so much in the book, the produces cuts down certain scenes, for it would go a whole lot longer. The troll and the potion scenes that was supposed to be straight after the chess scene is not in the video, as the video goes straight to where the mirror was. The reason for that is that the film would go a whole lot longer if it wasn't for the scenes to be shortened out. ...read more.