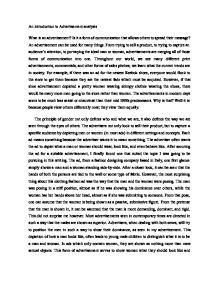 An introduction to Advertisement analysis. In the article Beauty (Re)discovers the Male Body, the male body as a public image (in advertising more specifically) is thoroughly discussed.

An introduction to Advertisement analysis What is an advertisement? Is it a form of communication that allows others to spread their message? An advertisement can be used for many things. From trying to sell a product, to trying to capture an audience's attention, to portraying the ideal man or woman, advertisements are merging all of those forms of communication into one. Throughout our world, we see many different print advertisements, commercials, and other forms of sales pitches; we learn what the current trends are in society. For example, if there was an ad for the newest Reebok shoes, everyone would flock to the store to get them because they are the newest fads which must be acquired. However, if that shoe advertisement depicted a pretty woman wearing skimpy clothes wearing the shoes, there would be many more men going to the store rather than women. The advertisements in modern days seem to be much less s****t or chauvinist than their mid 1900s predecessors. Why is that? Well it is because people view others differently now; they view them equally. The principle of gender not only defines who and what we are, it also defines the way we are seen through the eyes of others. ...read more.

In ads which only contain women, they are shown as nothing more than mere s****l objects. This form of advertisement serves to show women what they should look like and men how their women should look like. The women are simply depicted as objects of desire which are used hook potential customers. These advertisements teach us a lot about society and the way the media influences society. In the article "Beauty (Re)discovers the Male Body", the male body as a public image (in advertising more specifically) is thoroughly discussed. Susan Bordo's article starts out by explaining the male body in terms of a visual commercial image. She says that when someone looks at her, she feels sexy; a feeling that many women get addicted to. Bordo goes on to explain men and women, in terms of differences in style. Conventionally, women are supposed to be objects for attention, and men are supposed to be the ones who are always in the course of action. Men, in modern times, are being portrayed as s****l images in public ads; often trying to attract women who are prone to gazing at the male photography. ...read more.

But then why would women want to buy these clothes? Well, if you think about it, the buyers don't examine the ad in such detail. The women just want to know if these clothes are fashionably favorable and trendy or not. If they are trendy, then the company has just made a sale, if not, then the advertiser will have to use different forms of communication to attract potential buyers. Ads are continuously trying to monetize off of the customers because that is what they are made to do. If the advertisers preach a negative message, then the clientele will follow that negative message and vice versa. Advertisements do not need to be raunchy or tasteless to get a message across, even though that those tactics work more proficiently. A simple message such as, this is what a man should look and behave like and that this is what an ideal woman is like, will make the consumers even happier. This partially ties into psychology because the consumers like to see that they are similar to the actor/model in the Advertisement. So the advertisers try to give the consumers what exactly they all want. This often leads to the subtle hints that each ad contains and allows an individual to perceive the ad as they wish and not be forced to view differently as the majority perception. ...read more.