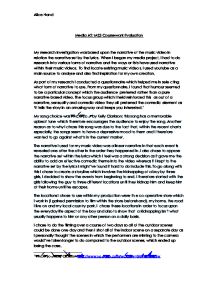 Coursework Evaluation- Music Video. My research investigation was based upon the narrative of the music video in relation the narrative set by the lyrics. When I began my media project, I had to do research into various forms of narrative and the ways art

Media A2: MS3 Coursework Evaluation My research investigation was based upon the narrative of the music video in relation the narrative set by the lyrics. When I began my media project, I had to do research into various forms of narrative and the ways artists have used narrative within their music videos. To find locate existing music videos, I used youtube as a main source to analyse and also find inspiration for my own creation. As part of my research I conducted a questionnaire which helped me in selecting what form of narrative to use. From my questionnaire, I found that humour seemed to be a particular concept which the audience preferred rather than a pure narrative based video. The focus group which I held reinforced this as out of a narrative, sensuality and comedic video they all preferred the comedic element as 'It tells the story in an amusing way and keeps you interested.' ...read more.

To go along with this I chose to create a storyline which involves the kidnapping of a boy by three girls, I decided to show the events from beginning to end. I therefore started with the girls following the guy to three different locations until they kidnap him and keep him at their home until he escapes. The locations I chose to use within my production were the co-operative store which I work in (I gained permission to film within the store beforehand), my home, the road I live on and my local country park. I chose these locations in order to focus upon the everyday life aspect of the boy and also to show that a kidnapping isn't what usually happens to him or any other person on a daily basis. I chose to do the filming over a course of two days so all of the outdoor scenes could be done one ...read more.

So throughout the process of creating the music video, I had oral feedback from various people in ways to improve the music video which resulted in the final cut. I posted the final product onto youtube and facebook in order to gain comments from a variety of age groups and I also gained a wider knowledge upon the audience's reaction towards the music video. The overall reaction from the audience was that 'there is a very clear connection between the video and the research investigation as well as making it comedic' as well as the feedback upon 'really good camera work'. From the positive reactions of audiences, I feel I successfully achieved my objective to oppose the narrative set by the lyrics through the editing I done as well as my success in applying a comedic theme to the video. Word Count: 750 1 I want you, Kelly Clarkson http://www.youtube.com/watch?v=GnrjJNBhE5w ?? ?? ?? ?? Alice Hand ...read more.