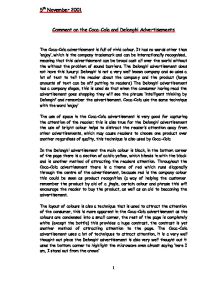 The Coca-Cola advertisement uses a picture of young people at a party having fun to appeal to the target audience. The people in the picture are all squashed up suggesting that there are more people than we can see. This could be a way of the company saying 'look at all these young, popular, beautiful people who are having fun drinking Coca-Cola' and so encourages teenagers to want to be like them. Also, the image of the party is blurred this makes readers look closer and so is another form of attracting attention to the advertisement. The Delonghi advertisement appeared in a glossy magazine called 'Ideal home' this is obviously an intentional move, the magazine was priced at two pounds and twenty pence and so would be purchased by the older person with more money and an interest in improving there home, (the target audience). The Coca-Cola advertisement appeared in a magazine called smash hits, which is aimed at younger people with less money; this is Coca-Cola's Target audience. The Coca-Cola company placed the advertisement in Smash hits magazine so that it would reach the target audience easily, without great cost. The font style on the Coca-Cola bottle is the classic company style writing, this is recognisable from a glance worldwide and has a reputation for being one of the largest, longest formed drink's firms in the world, this fact that the company has been ...read more.

Throughout the Delonghi advertisement the company name and name of the product, this is to familiarize the consumer with the product name so when shopping they will remember the name and this will affect what they buy. The target audience in this advertisement is women, we can tell this by the language used. The writer is constantly running men down, this is evident from the first line and so all the way through the piece. As well as running mend down, the writer is constantly driving women up, for women to use the microwave oven it is described as creating "their own culinary masterpieces". Where as if men are to use this microwave oven this is described as "you don't have to weigh the food or set the cooking time, this leaves loads more time for more important man things". Throughout the advertisement the writer constantly complements and praises women even stoops to say "make good use of your IQ and add the Infinito to your labour saving kitchen", this is ironic, as someone who would spend vast amounts of money on the basis of flattery would be seen to not have a particularly high IQ. The advertisement also uses the rule of three to put across its pint 'surfing the not, shelf fixing and concentrated sports channel watching. 1 ...read more.