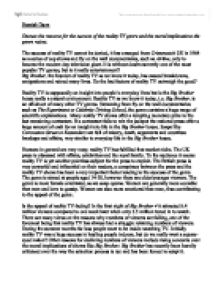 Discuss the reasons for the success of the reality TV genre and the moral implications the genre raises.

Hamish Dunn Discuss the reasons for the success of the reality TV genre and the moral implications the genre raises. The success of reality TV cannot be denied, it has emerged from Crimewatch UK in 1984 as a series of cop shows and fly on the wall documentaries, such as Airline, only to become the modern day television giant. It is without doubt currently one of the most popular TV genres, but is it really entertainment? Big Brother, the founder of reality TV as we know it today, has caused breakdowns, emigrations and ruined many lives. Do the bad factors of reality TV outweigh the good? Reality TV is supposedly an insight into people's everyday lives but is the Big Brother house really a natural environment. Reality TV as we know it today, i.e. Big Brother, is an off-shoot of many other TV genres. Stemming from fly on the wall documentaries such as The Experiment or Celebrity Driving School, the genre contains a huge range of scientific explanations. Many reality TV shows offer a tempting monetary prize to the last remaining contestant. If a contestant fails to win the jackpot the national press offer a large amount of cash for an insight into life in the Big Brother house. Soaps like Coronation Street or Eastenders are full of misery, death, arguments and countless breakups and affairs, very similar to everyday life in the Big Brother house. ...read more.

Big Brother has sparked off many other reality TV shows such as I'm a celebrity get me out of here but all these shows bore down to the same question in the audience's mind, is this really entertainment? The public audience needs more variety or they will become bored with the endless reality TV shows. However even in these dark times some companies are still trying to haul in viewers from the dying genre with more exciting and even insane shows such as Celebrity Jump. Channel 4 executives have even resorted to broadcasting teenagers having sex on primetime TV in a quest to drive up viewer ratings, "TV bosses accused of exploiting youngsters to boost viewer ratings." (Daily Mail, October 16th 2003) It is because of acts like this that many believe reality TV is the downfall of British television. There is deep controversy over the moral implications of shows like Big Brother. Jade Goody BB3 for example, was ruined by the media. Whilst in the Big Brother house Jade was caught sharing a bed with male contestant Danny Jarman, Jade was also broadcasted on national TV playing strip poker. A sexually orientated story like this makes a great article and the media have even gone to the extent of offering prize money to the first couple to have sex in the Big Brother house in an attempt to rinse the genre of any remaining money before it dies out. ...read more.

(John Beyer, Director of Big Brother pressure group) Should two companies have the right to cause so much misery to families and money to the taxpayer for the sake of upping viewer ratings? And are Big Brother contestants really the right role models for the youth of today? Reality TV no longer appeals to the audience as it has done in the past. Program makers are being pushed into tighter regulations by the moral implication raised and fortunately or unfortunately this is causing the genre to suffer. The genre has been at the forefront of the media for several years now but it has lost the innovative front it needs to survive on the air. The genre has ruined lives and the appeal of watching normal people in a false environment is minimal. Contestants may take responsibility for their own actions but does that automatically mean the print media has the right to abuse them for the sake of making good news. To the audience it seems that the genre has broken the line between what is regarded as entertainment and what is considered immoral, as a result the genre has experienced falling viewer ratings and an onslaught of criticism from the national press and critics. The short-lived success of reality TV can only suggest that it is not really the kind of entertainment the British audience wants. ...read more.