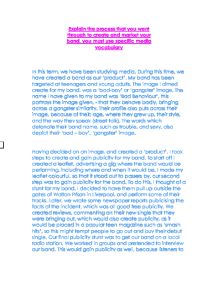 Explain the process that you went through to create and market your band, you must use specific media vocabulary.

Explain the process that you went through to create and market your band, you must use specific media vocabulary In this term, we have been studying media. During this time, we have created a band as our 'product'. My band has been targeted at teenagers and young adults. The image I aimed create for my band, was a 'bad-boy' or 'gangster' image. The name I have given to my band was 'Bad Behaviour', this portrays the image given, - that they behave badly, bringing across a gangster similarity. Their profile also puts across their image, because of their; age, where they grew up, their style, and the way they speak (street talk). ...read more.

To do this, I thought of a stunt for my band, I decided to have them pull up outside the gates of Walton Prison in Liverpool, and perform some of their tracks. Later, we wrote some newspaper reports publicising the facts of the incident, which was all good free publicity. We created reviews, commenting on their new single that they were bringing out, which would also create publicity, as it would be placed in a popular teen magazine such as 'smash hits', so this might tempt people to go out and buy their debut single. Our final publicity stunt was to get our band on a local radio station. ...read more.

This is where their influences originally grew from. The image that my band puts across is a 'bad - boy' image which their influential bands, like So Solid crew, and Blazin' Squad also have. After creating and marketing my band, I am aware that famous bands don't just appear with their fame and money, they have to earn it. They take careful steps in order to ensure that they are a success. A lot of hard work is needed in order to complete these steps. It is very important to work towards a specific target audience, because peoples taste in music differs as they get older. This means that you would need to include ranges of different types of music in your single, which would be incredibly difficult to achieve music that a majority of people all like. By Kayly Roberts 9J ...read more.