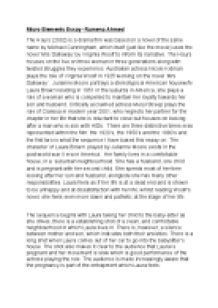 Explore Mise en Scene and Cinematography in a scene from &quot;The Hours&quot; (2002).

﻿Micro Elements Essay- Rumena Ahmed The Hours (2002) is a drama film was based on a novel of the same name by Michael Cunningham, which itself (just like the movie) uses the novel ?Mrs Dalloway? by Virginia Woolf to inform its narrative. The Hours focuses on the live on three woman in three generations along with twisted struggles they experience; Australian actress Nicole Kidman plays the role of Virginia Woolf in 1925 working on the novel ?Mrs Dalloway?. Julianne Moore portrays a stereotypical American housewife Laura Brown residing in 1951 in the suburbs in America, she plays a role of a woman who is compelled to maintain her loyalty towards her son and husband. Critically acclaimed actress Meryl Streep plays the role of Clarissa in modern year 2001, who neglects her partner for the chapter in her life that she is reluctant to close but focuses on looking after a man who is sick with AIDs. There are three distinctive times eras represented within the film: the 1920?s, the 1950?s and the 1990?s and the first two is what the sequence I have based this essay on. The character of Laura Brown played by Julianne Moore exists in the post-world war II era in America.. Her family lives in a comfortable house, in a suburban neighbourhood. She has a husband, one child and is pregnant with her second child. ...read more.

Richard?s face, also shot in mid-shot, is serious. Laura, who is the mother is show to have determination which contrasted with the increasingly close-up shots of Richard, becoming more and more hysterical as his mother?s car pulls away, this shows the emotional attachment between characters using various shots and performance in the shots. The next shot of Richard within this sequence is a long shot of him standing in the road, looking at the back of his mother?s car as it departs.He is small, vulnerable and alone within this frame and as the viewer realises later in the film, this theme, abandonment, is one of the key causes for the adult Richard?s tendency towards self-destruction.The next series of shots within this sequence show Laura driving and Richard in the living room of his baby-sitter. The mise-en-scene of the sitter?s house indicates the 1950s setting of Laura?s narrative. The huge flowered wallpaper of the room.. After that we view Laura driving and then a long shot shows her swerving off the freeway. She has arrived at a hotel; the mise-en-scene of which is grand, yet anonymous. Laura is then shot in central frame, over the shoulder of a porter. As the porter moves out of shot, Laura is left, alone, in a large, stylish, but lifeless room. The colours within the room are creams and beiges. ...read more.

However, the shot cutting of Virginia Woolf and the close-up of her suddenly seeming to wake from her sleep, stops the viewer from having this fear confirmed. The connections built between Woolf and Laura through the cinematography within this sequence, gives the audience a hope for Laura. The cut back to Laura in mid shot, shows her waking suddenly and gasping for air, stating ? I can?t ?. The camera tracking shot slowly back from Laura as she begins to cry, hold her pregnant stomach and rocks back and forth. The camera and the viewer may be able to leave Laura at this point, as she has not committed suicide, but her body language indicates that her unhappiness is still very real and is very sad. The cinematography and mise-en-scene used in this sequence have contributed to the audience?s increased understanding of the character of Laura Brown. These micro elements have shown the dissatisfaction which can lie beneath the American Dream of the post war years. The differences in mise-en-scene between Laura Brown and Virginia Woolf? scenes have distanced them in terms of chronological years as the two characters are based from two different eras which the use of Mise en scene in clothing and performance help differ and makes the audience?s understanding of the characters more advance, also the cinematography and performance has clearly shown the connection between the two characters which also helps the audience understand the story line of the movie ?The Hours?. ...read more.