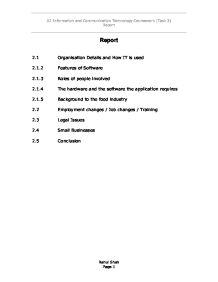 How IT is used in Sainsbury's.

Report 2.1 Organisation Details and How IT is used 2.1.2 Features of Software 2.1.3 Roles of people involved 2.1.4 The hardware and the software the application requires 2.1.5 Background to the food industry 2.2 Employment changes / Job changes / Training 2.3 Legal Issues 2.4 Small Businesses 2.5 Conclusion 2.1 Organisation Details and How IT is used Sainsbury's was founded in 1869 by John James and Mary Ann Sainsbury. They opened their first small dairy shop at 173 Drury Lane, London. It was so successful that further branches were opened in other market streets in Stepney, Islington and Kentish Town. The firm has expanded gradually over a century and now cover most of the UK with 463 stores nationwide. Recently, the group has expanded in the USA, where it acquired the New England-based Shaw's Supermarkets Ltd in 1987 and diversified into banking, with the establishment in 1997 of Sainsbury's Bank. The Sainsbury group today is one of the world's leading retailers, playing a part in the lives of 15 million customers a week and employing over 169,000 people by June 2001. In 1995, Sainsbury's was the first British supermarket Company to offer goods for sale from home, which after many trials of different methods has become the Internet Shopping service, "Sainsbury's To You". The first method of home shopping was introduced in 1995 and was called Order & Collect. This was trialled at Sainsbury's Solihull store. It involved customers using a personal catalogue to order by fax and then collect their orders from the store. After a small number of further trials into the desirability of home shopping, Sainsbury's To You was introduced in spring 2000. Sainsbury's re-branded their home shopping service and introduced Sainsbury's To You in the London area. Sainsbury's To You represents a more personalised online service with a new look website compared with those from the previous trials. The site greets customers by name and has the facility for customers to create and save their own shopping lists. ...read more.

Microsoft Outlook- its main features are:- E-mail Account configuration, aids user in writing e-mails, provides a calendar service, a contacts list where e-mail addresses can be stored, ability to convert HTML messages to plain text format or Outlook rich text. The hardware the application requires:- * A microcomputer, * 26.6 Kbps modem, * Minimum hardware requirements. The software the application requires:- * Computer setup of any Operating System such as Windows, Apple Mac, * Internet service provider (Internet exp 5.5 or above, Apple Mac above OS10, access through television), connection to the internet or access to one, * Software of any type with Internet Explorer, * A web browser such as Internet Explorer. 2.1.5 Background of the Food Industry The first use of computing in the food industry was in the 1980's when mainframe computers were used. In 1990's Sainsbury's introduced their own system. Originally designed to facilitate stock taking, and accounts, it became more specialised in range and functionality providing combined facilities to enable front end and back end operations. Initially, the costs were very high, so only big, well-off companies like high street names and large supermarket Companies could afford access to computerised systems. Nowadays, due to the use of more personal computers, it is more affordable for Companies. In the mid 90's, most of the manual systems had been replaced by computerised ones. Introduction of personal computers to offices enhanced the effectiveness of related operations. With constantly developing technology, more sophisticated hardware and software solutions were introduced to increase the quality of the service. In the past three years, changes have been made to the food industry. The Internet and World Wide Web soon are now standard means for distribution and promotion of goods. The food industry relies on and is dependant on its communication with users to provide a good service. Many supermarkets have implemented the Internet, which has enabled them to become part of the online side of the industry. ...read more.

higher income and profits. Whether an employee is planning to start work at a high street or online supermarket, they do not need any specific qualifications except possibly GCSE's. Many online supermarket providers send their employees on a course that provides a basic understanding of the food industry. All supermarkets also have on-the-job training for their employees. With online supermarkets, an important part of this consists of computer training. Computer skills are required by all employees to operate the online ordering facility. When an employee joins a high street supermarket, like Sainsbury's, they are provided with on the job training carried out by the manager, as they are not expected to have previous knowledge of the industry and how it works. The main training that is necessary is for the employee to learn how to use the EPOS (tills), to process information. This can be fairly complicated because there is no manual booklet and it will take the employee some time to get used to all the functions available as the user interface is bespoke. The employee needs to be comfortable with using the applications, this will come with time, and the employee will be able to use them with ease. The training received by employees at the online supermarket differs according to the size of the Company. If the Company has a high street store or stores, such as Tesco, they tend to be sent to an outside training Company, not only to learn how to use certain applications but also to learn about the Company's objectives. Smaller online supermarkets may use a similar method to high street supermarkets by providing the job training. Employees working at online supermarkets need to be able to have fast typing skills as well as good telephone skills as a number of customers will use the telephone to place orders. There will also be a need for a technical line so that customers having problems with the online site can speak to an operator and hopefully get a solution to the problem that they are encountering. ...read more.