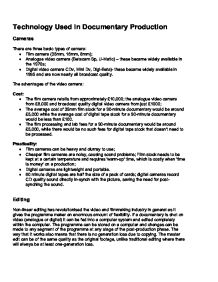 it can be fed into a computer system and edited completely within the computer. The programme can be stored on a computer and changes can be made to any segment of the programme at any stage of the post-production phase. The way that it works also means that there is no generation loss due to copying. The master edit can be of the same quality as the original footage, unlike traditional editing where there will always be at least one-generation loss. If the documentary is shot on film, it can still be edited in the same way. It requires the negative to be telecined to video, complete with the relevant frame information. This can then be fed into the computer and edited as above. ...read more.

can be stored onto a hard disc as digital data and then manipulated an infinite number of times before committing the final copy to a tape. Recent technological developments Steadicam: developed in the 1970s, this is the trade name for a widely used device that balances hand-held cameras gyroscopically, allowing for greater flexibility and fluid movement that is usually used to provide point-of-view (P.O.V) shots. (The corresponding device made by Panavision is known as the 'panaglide'.) Video Assist: this is an adaptor with a video camera inside, which is fitted onto a film camera. When shooting, the video images are shot simultaneously with the film images and through the same lens, allowing the director to review the scenes as soon as they are completed. D.A.T. (Digital Audio Tape): this enables crystal clear sound recording that can be synched to film or video. ...read more.